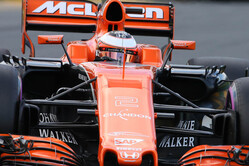 A hugely disappointing afternoon for the whole McLaren-Honda team after Fernando Alonso failed to start the Russian Grand Prix, and Stoffel Vandoorne took the chequered flag in 14th position.

Fernando suffered an ERS software fault on the parade lap, and, despite attempting to restart it during the lap, he was unable to make it back to the pits and was left stranded on the circuit.

Stoffel put his head down and drove a tidy, measured race, finishing 14th - getting the best from his car but unable to challenge any of the runners ahead of him.

Fernando Alonso: "It's tough, it's frustrating - every weekend is the same. My power unit didn't have the usual power during the formation lap, so my engineer told me to change some settings on the steering wheel. Unfortunately, that didn't work and towards the end of the lap the engine shut down. My race was over before it started.

"Not being able to take part in the race today and not being able to finish any race so far this season is extremely tough. But Formula1 is my life, so hopefully we can improve the situation soon."

Stoffel Vandoorne: "From my side, 14th position was pretty much the best possible result today. "I had a decent start but had to avoid a first-corner accident, which meant I got a five-second time penalty for missing the markers at Turn Two.

"However, I don't think that did anything to change today's result. It was a pretty normal race, we ran at our own pace, I did the maximum possible and I think 14th is a fair reflection of where we're at.

"Fernando not being able to start shows that there's still a lot of work to do on the reliability side - that's two races in a row where two McLarens haven't started. That's a shame, but at least we got to the finish - that meant a lot of learning for the team and a lot of learning for myself. But, in terms of pace, we're still not quick enough - that's for sure."

Eric Boullier: "You cannot hide behind a result like this: finishing 14th is not why McLaren-Honda goes racing, and, believe me, we are working hard to make sure this level of performance doesn't last for long.

"That said, it's still extremely disappointing to run into reliability and performance issues during a race weekend - we must work together to pull ourselves out of this position.

"Given the performance limitations he had today, Stoffel drove a very measured and efficient race, doing everything that was asked of him to look after his tyres and fuel. As I say, 14th is not a notable result, but it's exactly what we could expect from his car this afternoon. It's pleasing that he was able to make the finish and gain some useful mileage.

"As for Fernando, I share his frustration - it's not acceptable to start the second consecutive grand prix with only one car, and we need to address this shortcoming immediately. He is naturally disappointed, but things will get better."

Yusuke Hasegawa: "We've had an incredibly difficult and ultimately disappointing weekend here in Russia. "That said, it was a positive that Stoffel finished the race, especially in such tough conditions, starting from the back of the grid. Today his running was impressive and he kept consistent pace in a difficult situation with tyre and fuel management. Stoffel hasn't had an easy start to the season with many issues during each race weekend, so we're happy that he finally took the chequered flag, albeit in P14 which is of course not where we want to be.

"Fernando lost the power from his deployment with the system failure of ERS during the formation lap. Although we tried to fix it by rebooting the system while running, we weren't able to recover it. As a result, we had to stop the car out on the track and were unable to start the race. We'll be investigating the cause of the system failure.

"It's a big disappointment for us that we're not able to complete the race with both drivers, but we will move forwards from this and keep pushing. We're expecting some updates to the PU over the next few races, and we'll continue working on our development in order to be more competitive with better reliability."