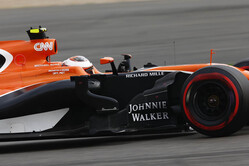 Over the course of the Bahrain Grand Prix weekend, a reoccurring MGU-H issue, resulted in Fernando Alonso failing to post a time in Q2 and Stoffel Vandoorne failing to make it to the grid next day.

As the units were sent back to Japan for analysis, accompanied by boss Yusuke Hasegawa, the team prepared for the first in-season test of the year.

While the first day, when Oliver Turvey was at the wheel, was marred by further reliability issues, this time a water leak from the energy recovery system, Stoffel Vandoorne enjoyed an almost trouble-free day on Wednesday, completing 81 laps on his way to posting the fourth best time of the day.

Such was the improvement, the team was mystified.

"Today was really good," said the Belgian, "but we need every day to be this good, and there are no guarantees that it will be like this next time.

"We need to learn very carefully from what we've done today, and hopefully carry that forward to the next event and see some improvements."

"We've managed a 'proper' test today," added Eric Boullier, "and really made the most of every opportunity out on track. Everything we've planned, we've tested, and we've done back-to-back runs, so I'm really happy with the work we've completed today.

"It's complicated to understand the issues we've had over the past few days, since today we've managed to run without any problems, but Honda are working hard to understand where the weaknesses lie. We've been able to run with a more aggressive set-up today, gathered a lot of information and tested a lot of solutions, so in terms of both data and results it's, been a very positive day of testing."

Now, as the team looks ahead to Sochi, Hasegawa believes the issue has been resolved and as a result both drivers will benefit from reliability updates.

"After a disappointing grand prix weekend in Bahrain, the team has been working hard to implement some countermeasures to help combat our MGU-H issues," he said. "By the second day of testing, we think we were able to confirm the direction of our solution against the issue after completing 81 laps with Stoffel behind the wheel. The results are testament to the team's hard work and determination."

Unfortunately, the previous failures mean that Vandoorne is already on his third MGU-H of the season and Alonso his second, consequently the new units provided in Russia will take them perilously close to the stage at which they begin incurring penalties.