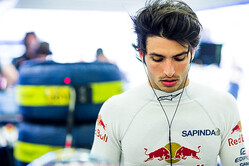 Carlos Sainz has been handed a grid penalty at the Russian GP following his clash with Lance Stroll in today's Bahrain race.

In the wake of the incident on the 12th lap of the race, both drivers blamed the other after the Spaniard T-boned the Canadian at T1 after leaving the pits.

"I saw Sainz coming out of the pitlane," said Stroll, "I was 50 or 60 metres in front of him in the braking zone, and was already turning in and he drove into my side.

"There is not much else to say," he insisted, "as I have just seen the video and it was ridiculous.

"The race wasn't going badly," he added. "I had a bad start and lost a couple of positions, but boxed early and had a really good beginning to the stint on the soft tyres. I am just disappointed and hope my luck turns round sometime soon."

"It definitely hasn't been a good weekend for us," said Sainz, who had started the race from a lowly 16th position following a power unit issue in Q1. "We've had reliability problems on Friday and yesterday, which meant that today we had to do a race starting from the back. It started well, and I recovered from P16 to P11 during the first lap – we were definitely catching the points positions.

"Unfortunately, all of a sudden after the pit-stop I was involved in an incident with Lance and that was the end of my race."

Having heard from both drivers and studied the video evidence, which showed that Stroll was on the normal racing line, the stewards deemed that Sainz left the pit lane and made a "very optimistic attempt" to pass the Williams into the corner.

The stewards decided that Sainz was predominately to blame for causing the collision in violation of Article 27.4 of the Sporting Regulations.

Handing the Toro Rosso driver a drop of 3 grid positions in Sochi, along with 2 penalty points - bringing his 12 month period total up to 7 - Sainz was reminded that the penalty is not susceptible to appeal.

The incident marked the second successive event in which Stroll has been the innocent victim of another driver and consequently failed to finish the race.