Honda at a loss to explain failures 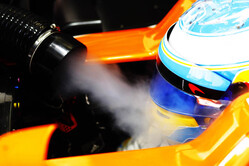 While it was initially thought that Fernando Alonso's decision not to run in Q2 was down to the Spaniard not feeling he could not improve on 15th, the two-time world champion soon put the record straight, revealing that he had suffered an engine failure.

In fact it was an MGU-H failure, Honda's third of the weekend, and the Japanese manufacturer is perplexed by the problem.

"It became a very disappointing day in the end today," admitted Yusuke Hasegawa. "During FP3 we were able to complete our practice programme as planned to find suitable qualifying and race settings. Unfortunately in qualifying we had to end Fernando's Q2 session prematurely after detecting an MGU-H issue.

"We are still investigating to find out exactly what the issue is and whether or not it's related to Stoffel's issues yesterday," he admitted, the Belgian having suffered two failures on Friday.

Hasegawa also confirmed that the MGU-Hs are 'dead' which means they cannot be used again. Indeed, it is understood the failures, thought to be bearing related, caused extensive damage to the internal combustion engines meaning that they too cannot be repaired.

With three failures thus far, it is anticipated that Alonso and Vandoorne will suffer further issues during today's race.

Indeed, Alonso, who is heading to Indianapolis next month in a bid to put the McLaren-Honda F1 nightmare behind him, revealed his continuing frustration when asked about the driveability of the engine.

"It's hurting," he admitted. "We had the possibility to be a couple of places better and now we have to fit a new power unit tomorrow without the perfect settings and no warm-up or laps to set the engine, so we will probably have a difficult race."