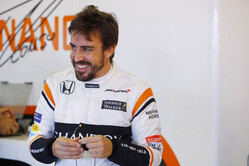 It has been revealed that Zak Brown, Executive Director at McLaren, was the driving force behind Fernando Alonso's Indy 500 move.

The many-hatted American approached Mark Miles, President & CEO of Hulman & Company which own s the Indianapolis Motor Speedway, in what Racer.com describes as a "way to help boost the Indianapolis 500's profile" whilst also ticking a box on the Spaniard's "bucket list".

"I got a call from Zak a couple of weeks ago," Miles told Racer.com, "and he wondered if we could put a Honda deal together so Fernando could run in this year's Indy 500.

"I said we would move heaven and earth to make that happen," he continued. "So I contacted some Honda teams and he contacted one, but we couldn't find an engine. And then we got lucky."

Miles approached Stefan Wilson, brother of the late Justin Wilson, who was in the process of putting his own Indy programme together. Miles suggested that giving his seat over to Alonso would allow IMS to "add to the value of his programme for 2018".

"As much as he wanted to run the Speedway this year, he was looking out for the greater good of IndyCar," said Miles. "Quite a gesture."

Marketing guru Brown subsequently approached officials at both McLaren and Honda in a bid to sell the idea to them.

"It's an amazing story," said Miles. "Fernando wants to go for the Triple Crown and McLaren is returning after a 38-year absence and all that history.

"Alonso has never been on a superspeedway, but he'll get a private test day at IMS and all that practice in May," he added, "and Alexander Rossi showed a rookie could win last May.

"The heroes of this story are Alonso, Zak, Michael and Stefan, and I think it's going to be a pretty cool story, and another great month of May."

At a time Motorsport.com, of which Brown is non-executive chairman, is reporting that its 'fan survey' reveals Alonso to be neck and neck with Lewis Hamilton in terms of popularity, one wonders how F1's owners might perceive a move whereby a star F1 driver is being used to "boost the Indianapolis 500's profile".