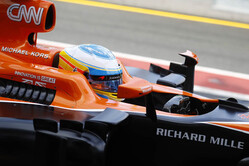 Today was much more action-packed on track than yesterday, the team making the most of the track time in FP3 to fully dial in the car ready for qualifying and the race. Fernando Alonso completed 17 laps and Stoffel Vandoorne 21, providing the engineers with much-needed data to digest in the short two-hour turnaround before qualifying began.

In Q1, changes made on Stoffel's car between sessions meant that there was a short delay getting him out for his first run. That slightly compromised his scheduled programme and meant during his one and only run - interrupted by a quick pit-stop for a fresh set of tyres - he encountered traffic. Moreover, any attempt at a final flying lap was prevented by Antonio Giovinazzi's incident, which occurred a few seconds after Stoffel had crossed the line just before the chequered flag.

By contrast, Fernando had a relatively trouble-free session and was able to push the limits of the car, getting into Q2 after setting the 10th fastest time on his final flying lap. His Q2 session went smoothly and he will start tomorrow's race in 13th place.

Fernando Alonso: "I think I extracted the maximum from the car today - I was flat-out and pushed like an animal. We were pessimistic going into qualifying, after our FP3 performance had been very uncompetitive and we'd felt we had nothing left, but in quali the car picked up some pace and we were able to make it into Q2 and get 13th, which was a nice surprise.

"For tomorrow's race, the expected rain will help us, since in dry conditions it would be difficult to score points, but in wet conditions anything could happen. We need some chaos in the race, basically. We've raced here in those conditions in the past so we have to use that experience and take any opportunity that opens up in front of us.

"If it rains it will be a good race to watch for the fans: they'll enjoy it and for us it'll be fun too - if we can take our chances."

Stoffel Vandoorne: "After practice this morning I felt quite comfortable in the car, but unfortunately it took a bit longer than expected to get out onto the track for Q1, so we had a bit of a delay and had to rush through our programme. I'm a bit disappointed as I felt the chance was definitely there to get into Q2. Having more mileage yesterday would have probably been useful today also - it always helps when you know the track a bit better - but I think our pace this morning was pretty good straight away, so we'll see what we can do tomorrow.

"We're both pushing quite hard and it's normal to try different things on track to be able to extract the maximum out of the car. Today wasn't an ideal session but every kilometre here for me is valuable, so I'm learning a lot with every lap I do. We experienced very variable conditions today - I did one run in the wet yesterday and today was completely dry - but in general I've felt pretty comfortable right from the beginning of the weekend.

"Yesterday wasn't much of a show, and the conditions are expected to be wet again tomorrow, but we'll see. A bit of a mix-up of weather conditions will always be good for us at the moment, so let's see what happens in the race. If it rains again tomorrow, it'll mix everything up for everyone, so there could be some good opportunities for us, and we intend to make the most of them."

Eric Boullier: "Fernando carved a banzai lap in Q1 today to blast his way through to Q2. He then drove another good 'un to end up P13: not a great result in the grand scheme of things, but not at all bad given the long straights that we'd feared might prevent our car from being capable of qualifying even that well.

"By contrast, as in Melbourne two weeks ago, Stoffel was again unlucky. His running in Q1 was unexpectedly curtailed, having been compromised through no fault of his own by the waved yellow flags triggered by Antonio's [Giovinazzi] last-corner shunt, and he was unable to improve on P16 as a result. Obviously we'll never know for certain, but the pace he'd shown so far this weekend indicates to us that he'd have had a good chance of making it through to Q2 if he'd had a clear run at it.

"Moreover, bearing in mind that he's still driven only 31 laps of the Shanghai International Circuit, and had never set his eyes on it before this weekend, I judge his performance here to be very impressive indeed.

"Tomorrow, both our drivers must expect a tough race, whatever the weather, but they'll give it their all, as always."

Yusuke Hasegawa: "We came to China expecting to have a difficult grand prix weekend, which is reflected is our qualifying result. The Shanghai circuit is notoriously difficult on power units and is especially difficult for us with the two very long straights.

"Despite that, I'm very happy with the performances from both our drivers in tough conditions. Fernando displayed once again that he's a world class driver, and showcased his talent and experience with an excellent qualifying lap.

"Stoffel was in difficult situation today as he has barely done any running all weekend due to the weather conditions, and preparation here is key. Despite that, 16th was a great result for him.

"Tomorrow, the start will be the key to a good result, and it's important for us to get both cars to the finish of the race. We're expecting tricky weather conditions so it won't be easy, but we'll work as hard as ever with McLaren to extract the best out of our car."