Boullier: We are still working together 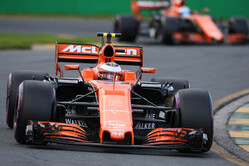 Following two tough seasons there were great expectations heading into testing that the partnership which claimed world titles with Alain Prost and Ayrton Senna may finally be in a position to do the same for Fernando Alonso.

However, those dreams were soon dashed, with a pre-season that could be best described as difficult and probably more accurately labelled calamitous.

Heading into tomorrow's season opening Australian Grand Prix the Woking outfit still hasn't logged a full race distance, a worrying sign for a team which was beset with reliability issues during testing.

Honda however believes it has been able to address many of the issues which hampered it before the season started, Yusuke Hasegawa happy with the way the weekend has progressed thus far.

"Yeah, this is positive," he insisted when asked if the largely trouble-free running could be seen as a good thing by the Japanese engine manufacturer. "We can almost finish a race or test procedure, or race procedure.

"The programme that we have in testing, we replaced everywhere, every single reason, we tried to modify the engine," he continued. The engine however remains down on power, a problem which is less easy to solve.

"We still struggle to extract more power from the engine," he admitted, revealing that Fernando Alonso and Stoffel Vandoorne will no more additional power than which they had in testing.

The troubled pre-season led to speculation that McLaren could dump Honda as the relationship between the two continues to struggle. Boullier refused to be drawn into the speculation, saying only that "our performance, and especially during our testing sessions, created such rumours".
Hasegawa was less forthcoming, trying to deny that McLaren had held talked with Mercedes. "That is a rumour," he protested when asked for Honda's reaction to the talks with the rival engine manufacturer.

"Sorry, I don't get your point," he continued when it was pointed out that the talks were, in fact, not rumours at all. "I don't care. I don't care about that. The point we have to do is keep concentrating on what we can do."

To his credit, Hasegawa was brutally honest when asked why the Honda engine has the problems it does, saying simply "we didn't do a great job."

Outwardly at least both McLaren and Honda are trying to resolve the problems. "We are definitely not in the position we expect to be and want to be, so with Honda we are working hard on this," Boullier insisted. "Testing was obviously not very good and we obviously still today we can see here our pace isn't good enough, but we are still working together."