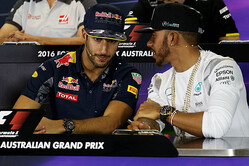 Though the answers are usually formulaic, giving precious little away, journos at this Thursday's FIA press conference will have several of the main contenders on hand.

Indeed, the two-parter sees Fernando Alonso on call along with Lewis Hamilton, Daniel Ricciardo and Sebastian Vettel in part one, while Valtteri Bottas, Felipe Massa, Esteban Ocon and Lance Stroll are scheduled for part two.

Following pre-season testing, Vettel is sure to be asked about those little lifts on his - and teammate Kimi Raikkonen's - quickest laps, along with the 2017 Maranello contender's improved reliability.

With Ferrari playing its cards very close to its chest thus far, fifteen minutes under the spotlights might persuade Vettel to give us a bit more hope for the season ahead.

Hot favourites Hamilton and Bottas will probably be as interested to hear about the SF70H's chances as the rest of us, while Daniel Ricciardo is the only representative present for Red Bull.

Having thought he'd seen the last of these, Felipe Massa is back in front of the microphones and flashbulbs, no doubt giving some guidance to rookie teammate Lance Stroll.

Sadly, centre of attention, for all the wrong reasons, will be Alonso, the Spaniard having already admitted that he faces a "difficult weekend".

Ferrari has remained tight-lipped throughout testing giving little away - either on track or off - so we can expect Maurizio Arrivabene to be under pressure for some insight and predictions on Friday.

While Toto Wolff is sure to play down his team's chances, Christian Horner is certain to be hoping the Austrian's predictions of doom prove accurate for once and that his own team can enjoy a period of similar domination… the F1 (Red Bull) equivalent of 'four legs good, two legs better'.

Days after joining the team, former Mercedes technical director, Paddy Lowe, makes his debut for Williams, while Eric Boullier is no doubt already rehearsing various platitudes, and the sincere facial expressions that accompany them, in terms of his total faith in his team's engine partner.