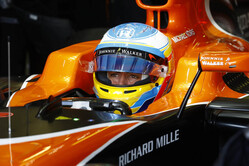 Fernando Alonso gave it everything in qualifying this evening to line up in 13th position for tomorrow's Australian Grand Prix. The Spaniard underlined his legendary pace by setting 12th-quickest time in Q1 before setting a best time of 1m25.425s at the end of the Q2 session.
Stoffel Vandoorne's qualifying session was hampered by a persistent fuel pressure issue, which forced him to abort his first two attempts at setting a Q1 lap time. Once the problem had been righted, his engineers dispatched him for one final crack at setting a time, and he delivered a 1m26.858s lap to line up 18th on tomorrow's grid.

Fernando Alonso: "After the difficulties we encountered in winter testing, we came to Melbourne without a clear idea of where we stood. But we've more or less run through all the sessions without trouble - which is better than we'd expected.

"I had sufficient sets of tyres to be able to enjoy my laps in both Q1 and Q2. I was happy with the balance of the car and was able to really push it. That's useful because, at the moment, we need to extract the maximum out of the package we have.

"Tomorrow we'll start 13th - in the middle of the pack - which is definitely not our target. Finishing the race is going to be tough. And, if we do finish it, to end up in a decent position we'll need help from the weather and for other cars to encounter trouble."

Stoffel Vandoorne: "I had a fuel pressure issue in Q1 and had to abort my first two runs as the engine was running low on power. That was a shame - because, after FP3, everything was heading in the right direction and I was feeling confident. But it's always difficult when you only get one opportunity to set a time because you can't take risks and have to make it really count.

"Still, we've made some good steps forward this weekend: Fernando and I both feel more comfortable in the car, and that confidence means we're able to push it a little bit more.

"Obviously, we still have a lot of work to do, but we can take some positives from the potential we've shown so far this weekend, and I think we can have a good race tomorrow."

Eric Boullier: "Fernando showed all his experience this afternoon, and coupled it with his undiminished natural speed, to carve a perfect lap whose verve and fluidity deserved better than P13. But in truth that's all our car is capable of delivering at the moment, and Fernando produced it all. Bravo.

"Stoffel suffered a fuel pressure problem that caused him to have to abort not one but two runs early in Q1, but then kept his cool to post a very good lap in extremely frustrating and stressful circumstances. He'll start tomorrow's race from P18 - but, like Fernando's, his lap was a lot better than that.

"We know we aren't where we want or need to be, either performance-wise or reliability-wise, but we're working through our problems together, and I'm massively impressed by the esprit de corps that exists within both McLaren and Honda. Well done, guys.

"Tomorrow's race may be a difficult one for us, but we'll pull together to get the best result possible."

Yusuke Hasegawa: "Today's qualifying was important because it gave us the first chance to judge our current position on track compared to our competitors. And although P13 and P18 is not where we want to be this season, after such a tough winter testing we can be relatively satisfied with our improvement.

"Fernando drove incredibly to extract everything out of the car, and Stoffel handled the pressure of qualifying extremely well despite having issues throughout the session. We are very lucky to have two such talented drivers in our team.

"Hopefully we will have a good start to the race tomorrow and we will have the opportunity to fight for points in the race. We know anything can happen, and you can be sure our drivers will be ready to grab any opportunity thrown their way."