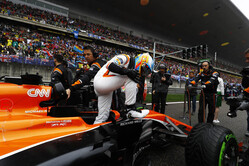 It was a short-lived Chinese Grand Prix for the McLaren-Honda team at the Shanghai International Circuit. Rain earlier in the day meant that the track was pretty damp for the start, both drivers consequently electing to start on new Intermediate tyres. Both Fernando and Stoffel made good starts - and, although Stoffel's car was tapped at the rear by another car, no damage was sustained and both he and Fernando escaped any major drama on the first lap.

On lap two, as the circuit was rapidly drying out, the team executed the perfect ‘double shuffle', pitting Fernando and Stoffel in turn for Prime tyres. Both were then released back into the pack, and both were able to make good progress on slicks, Fernando reaching sixth position by lap seven before settling into seventh place for a number of laps.

Unfortunately, however, the gods of reliability were not on the team's side, Stoffel falling foul of a fuel problem after losing power, forcing him to retire on lap 18, and Fernando suffering a driveshaft issue causing him to have to stop out on track on lap 34.

The team will now re-group before the second leg of the first pair of back-to-back races of the season: the Bahrain Grand Prix in a few days' time.

Fernando Alonso: "We started from P13 in very tricky conditions, and after a few laps we were running in sixth position. That was a big surprise and was thanks to an amazing couple of laps. I was hoping those tricky conditions would continue as other cars were spinning off here and there, and, as we said yesterday, we maximised our opportunities as we were overtaking ‘for free' at some moments.

"But then, when the track started drying out, we started to lose a little bit of ground even though we were still able to hold onto P7 for some time.

"Today we proved once more how hungry we are to get a good result, but unfortunately we're still not strong enough to finish the races. The lack of winter testing means we're paying a big price now, but hopefully we can improve quickly.

"It's a shame that neither Stoffel or I could not get to the end today, and especially painful because I was in the points, but all we can do is learn our lessons and be a little bit better in Bahrain, even though the forecast is of course for no rain..."

Stoffel Vandoorne: "It was a short race for me, but quite exciting at the beginning. Both Fernando and I got good starts, and were in the mix for the first few laps, although the positioning wasn't great after the pit-stops, and then after that it was a bit more tricky, but our pace was actually quite promising. When we put the slicks on, we were actually quite competitive and I was able to push when I wanted to. The car feels very good in the corners - I felt very confident and I was closing the gap to the guys in front - but as soon as it started to get drier, we really noticed the difference in speed and it made it very difficult to overtake. With the straight-line speed we have, we can't really compete with the others and it's tough out there for us to make up ground.

"On lap 17 we lost power - I don't really know exactly the reason - but I think it was a fuel problem. It's a shame we couldn't get to the finish today - the potential was there and the car felt quite competitive in the corners compared to the cars I was racing against. I felt the power drop and I could feel immediately we had very low power. It's not ideal, and obviously I would have liked to go to the end.

"There's not been many laps for me in China, but this is the situation we're in at the moment. We knew that before coming here and hopefully next weekend in Bahrain it will be better. There are still positives we can take away: the chassis is coming along, and both Fernando and I are feeling very confident to push. I hope it will get better soon - it's difficult to put a time-frame on it so we'll have to wait and see. Bahrain is a very different kind of circuit from Shanghai, and we'll do our best as usual."

Eric Boullier: "On a damp and slippery track, Fernando judged his getaway perfectly to make a superb start from his P13 grid slot, and was in eighth place by the time of the first virtual Safety Car just a few laps into the race. By lap seven he was up to sixth, and he duly began a highly entertaining dice with his fellow countryman Carlos [Sainz].

"Stoffel had also made a bit of progress by that time, having moved up from his P16 grid slot to a solid P15, and was capably holding station with the cars around him.

"Unfortunately, those promising beginnings were soon to come to naught, when a fuel problem ended Stoffel's race after only 17 laps and a driveshaft issue put paid to Fernando's afternoon after just 33.

"From here we travel straight to Bahrain, one of our three home Grands Prix, Silverstone and Suzuka being the other two, where we hope to enjoy a better, and warmer, weekend's racing."

Yusuke Hasegawa: "Despite the result today, I think we can take away multiple positives from this weekend.

"It was very tricky race conditions, yet the team did a great job as always and managed the pit-stop strategy perfectly. Fernando had an excellent start, making up multiple positions off the line, and I think he was having a very good race up until his retirement. Stoffel also made a good start and was racing well before his day sadly ended early.

"At one point it looked like we were on our way to scoring some points, which makes it all the more disappointing that both drivers ended up retiring with mechanical issues. "In spite of that, we leave Shanghai with certain progress of our PU reliability after both the Australian and Chinese Grands Prix.

"We're now looking forward to Bahrain next weekend, where hopefully we can continue to build on our momentum. It's only a few days away so we don't have long to prepare, but we'll work hard with McLaren to hopefully push for a better result."