Alonso's manic month of May 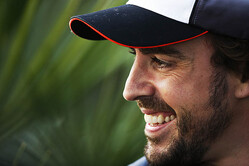 As he prepares for his much anticipated Indianapolis 500 debut, Fernando Alonso is prepared for a hectic schedule as he juggles his preparations for the American classic alongside his 'day job' with McLaren.

Asked what his preparations for Indianapolis will involve and how much time he expects to spend in the McLaren branded Dallara, he revealed the itinerary from hell.

"There is not a defined plan yet," he admitted, "it's still on-going, so I cannot answer 100 per cent sure what will be there.

"The plan, at the moment is that next weekend I will be in Alabama just visiting the race and meeting the team members to see how things go there.

"Probably on Monday after the race I will do the seat fitting, and then I will fly to Russia for the race.

"After Russia, I will try to be in Indianapolis for a couple of simulator days and hopefully test the car - but it's not 100 per cent sure.

"After that I will go to the Spanish Grand Prix and then fly to America on Sunday after the race because the free practice is on Monday at midday.

"So, definitely busy weeks in front," he smiled. "On the planes, I will try to look at some videos and some races from the past years and try to learn as quick as I can.

"It's completely different skills that you need there, to adapt to the car, to adapt to the circuit, strategies, ways of racing: that close, at that speed, so many things that I have to learn and I'm not ready yet, at the moment - but in the next couple of weeks I am confident I will be able to adapt as quick as I can.

"After Indy and Canada I will probably be two weeks in the living room watching television and relaxing," he admitted.

Indeed, the only thing that could make the month ahead any tougher is if he's booked with United.

Well, we all knew... there were places he would rather be.