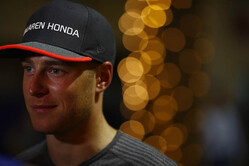 The Bahrain Grand Prix started in frustrating fashion for the McLaren-Honda team, when a water-pressure issue was detected in the #2 car of Stoffel Vandoorne on the way to the grid. The problem could not be fixed in time, and the team had no choice but to remove the car from the grid. Stoffel did not therefore start the race.

On the opposite side of the garage, Fernando made a good start - maintaining his starting position - and took full advantage of the Safety Car to pit on lap 13. By lap 19 he had battled his way up to 11th position. He enjoyed some exciting dices with the cars around him and was running in 12th position for the final third of the race. Two laps from the end, however, he reported that he felt something unusual from the cockpit, so the team elected to retire his car as a precaution following the reliability issues that have occurred throughout the weekend so far. The issue is now under investigation.

Fernando Alonso: "It was a frustrating race. The deficit in power and performance we had on the straights today was amazing. Sometimes I looked in the mirrors at the beginning of the straights and saw the other cars 300, 400 metres behind, so I forgot completely about that car and started changing settings on the steering wheel and doing my own things, then the next thing I see when I come on the brakes is that car alongside me. We were running close to the points but that's not enough. Today we never had the pace we had in Australia and China, and, in the end, we had a problem and we decided to retire the car.

"It's frustrating. When the red lights go off you're motivated and you start fighting, but you're so behind on the straights that there's no way you can defend your position. You fight in a fair way with everyone, but you don't enjoy the battle.

"Everyone in the team has been working very hard over this weekend, day and night, and I'm sorry for Stoffel who has had so much bad luck all weekend and then didn't even start today's race. "But we'll keep working hard, and we hope to improve in due course."

Stoffel Vandoorne: "It's a real shame that we weren't even able to start the race today. The team discovered a water-pressure issue on the way to the grid. It's disappointing, obviously, that we come all the way here and can't even start the race.

"We knew from the beginning of the season that the situation we were in was going to be difficult. I have an extremely good relationship with the team, I believe that we'll get on top of these issues, and I'm confident that I can do a good job when everything comes together. We're going through a hard time - it's not fun for us to go through this - but this is what it is at the moment, and today shows that.

"It's frustrating when you do all the preparation work, put in so much effort, we drivers train a lot to keep fit to be able to go racing, and then not being able to start is a shame. It's been an extremely difficult weekend for me, having two failures on Friday in FP1 and FP2, and now in the race: it's obviously very disappointing. But I'll keep my head down, I'll work hard with the team, and I'm sure there will be some improvements at some point. When they will be, it's difficult to say, but I'm confident that they'll come. We've lost quite a bit of mileage so it's definitely not an ideal situation, and we need to make a good step forward soon. Hopefully we can show that at some point in the next few races."

Eric Boullier: "Well, what can I say? Fernando failed to finish, and Stoffel failed even to start. So today was a bad day for McLaren-Honda: there's no point pretending otherwise.

"Stoffel's weekend went from bad to worse when, on the parade lap, his power unit suffered a water-pressure issue, having already sustained MGU-H damage on Friday. As a result of today's failure, we had no choice but to abort his start. But, despite being understandably frustrated and upset by a series of problems that had ruined his weekend, none of them his fault, he joined our engineers in the garage to offer his advice and support. He's a great lad.

"Fernando drove his usual gutsy race, driving the wheels off his MCL32 despite its straight-line speed deficiency, until he felt something wrong on lap 55. In light of all the problems we'd already had this weekend, we then agreed to retire his car. We'll now investigate what that problem was.

"We're disappointed to have put up such a disappointing performance for our Bahraini hosts, whose home Grand Prix was yet again both superbly organised and excitingly dramatic. The Bahrain International Circuit has now hosted 13 Grands Prix, and over that time it's become one of the Formula 1 circus's favourite venues."

Yusuke Hasegawa: "We've had yet another disappointing day today. We detected a water-pressure issue with Stoffel's PU just before the start of the race, so we took the difficult decision to not start the race. The issue is still under investigation, but we suspect that it's the same as we had on Friday.

"Despite difficult circumstances, Fernando had a better race, with some impressive overtaking manoeuvres. Unfortunately, with just two laps to go, he felt something wrong with the car and we had to retire it.

"Now we have two days of testing here in Bahrain. Our aim for this will be to improve PU reliability as well as performance, and to test some updated parts. I hope we'll see steps forward during the test."