Marko: We are the masters of 'catch-up'! 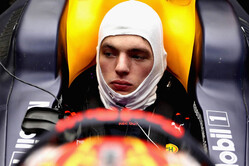 Urging Red Bull drivers, Daniel Ricciardo and Max Verstappen, to be patient, Helmut Marko insists all is not lost indeed, he is keen to play down media speculation the team is losing ground to Mercedes and Ferrari, insisting quite the opposite.

"Let me get our pace history straight," he tells the official F1 website. "In Australia we were 1.8 seconds behind, in China it was 1.3 seconds and in Bahrain something in the range of nine-tenths.

"So we are improving and step by step closing the gap," he continues, "but it is, of course, not enough. And looking at qualifying where the cars show their sheer speed, we know that Mercedes has a qualification mode - and to a certain extent also Ferrari - and that helps them a lot.

"By constantly closing the gap to them I would say that the direction we are moving in is promising. And as you don't get any points in qualifying, it is good news that in the race we are usually stronger if problems don't stop us like on Sunday when Max suffered a brake issue."

Asked if he feels Mercedes and Ferrari were sandbagging in Barcelona, thereby giving the appearance that Red Bull was in a three-way fight, the Austrian says: "At the first test we were pretty optimistic that the three teams were pretty even, but already at the second test we had to swallow the fact that we were behind. So Melbourne and Shanghai were not really the wake-up calls they probably were for outsiders: we knew what the situation was.

"We have two problems," he admits. "Renault had some reliability issues, which have slowed them down in the development; and we didn't deliver the chassis that we should have done. But we are working day and night to pick up our shortcomings. We are pretty optimistic that we will make a significant step forward in Barcelona where a big change of parts is coming. So sometimes patience is the best virtue a driver can have!"

Asked about the update, all he is willing to give away is that "the chassis will be 'revamped' in Barcelona and Renault is planning something for Montreal".

Asked if Barcelona will be too late, that by then Mercedes and Ferrari will be dots on the championship horizon, he laughs and replies: "Who says that?

"When we fought for the championship with Sebastian against Alonso we were 42 points behind still after the summer break... and won! So we are the masters of 'catch-up'!"