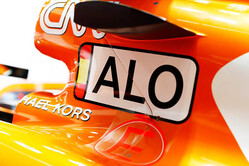 As Stoffel Vandoorne headed down the pitlane, the rear of his car sporting his compulsory driver id, we took to Twitter to comment that "somehow the word VAN on the side of the MCL32 seemed appropriate".

Shortly after, we were proven correct, when Fernando Alonso, on his first out-lap of the day, appeared to suffer an engine seizure which sent his car into a vicious spin. As the Spaniard climbed from his car, which was engulfed in smoke, marshals rushed to his aid.

Looking at the rear of the car, the Spaniard then watched as it was lifted to safety, fluid pouring from the rear suggesting a massive engine failure.

"It's a question for Honda, not for me," he told reporters moments later. "The engine blew up after one corner.

"It's the way it is," he added "we miss the first session. I feel sorry for the fans. It is tough, but I think it is more tough for McLaren. They bring updates, trying to find milliseconds here or there, and we cannot even run."

Shortly after, amidst claims he had left circuit, he tweeted "keeping the body active" alongside a picture of himself on a local tennis court, prompting fears that he might give FP2 a miss.

Honda subsequently revealed that the power unit, which suffered an oil leak, and which was raced in Australia and China, will be changed without penalty, though the move sees him edge ever closer towards the limit. It is understood the energy store, control electronics and ICE will not need to be changed.

Only yesterday, the Spaniard admitted that he is giving McLaren until September/October to raise its game and produce a car capable of winning or else he will seek pastures new for 2018.

Surely nobody would blame the two-time champ if hasn't already made his mind up.