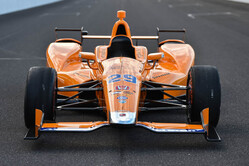 Fernando Alonso has revealed that he will be allowed to keep his Indy 500 car following the event later this month.

Speaking at today's press conference in Barcelona, the Spaniard revealed that since 2004 he has had a clause in his contract which allows him to keep his car at the end of the season.

"After the race, it is coming. It will be in the museum," he told reporters, referring to his museum in his home town of museum in Asturias.

"Every car I jump in from 2004 or something like that, it is always in my contract that it will be in my museum afterwards, so this one is no different."

Asked how the Dallara compared to his F1 mount, he admitted it "felt quite different.

"Running this asymmetric set-up definitely feels not normal to drive," he continued. "You need to adjust a little bit your mind set going into the run and the first corner. But at the end of the day I felt a bit more comfortable.

"When, next week, we start free practice and start running with other people around, I will hopefully build a little bit more confidence and understanding what the car needs and what I need as well to be prepared for May 28. Two intense weeks ahead, but looking forward to it."

Quite what part of his museum his McLaren-Honda will be placed in is anyone's guess, wonder if it has a Chamber of Horrors.