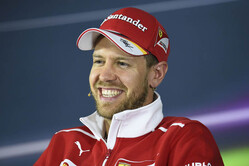 In the midst of his Indy 500 preparations, the Spaniard is sure to be the centre of attention as the European season kicks off.

Last week saw the Spaniard make his IndyCar debut, successfully passing his Rookie Orientation Programme. On Monday, the day after his home Grand Prix, he is back in action at Indianapolis as practice for the Indy 500 gets underway in earnest.

In part one of the new format press conference the two-time world champion will be joined by countryman Carlos Sainz and - always good for a laugh or two - world championship leader Sebastian Vettel.

The two part format has now been adopted for the team principals press conference also, and while part one features Cyril Abiteboul, Robert Fernley and Toto Wolff, part two sees Maurizio Arrivabene, Christian Horner and Monisha Kaltenborn on the dais.

No doubt, Wolff will continue to play down his team's chances, Fernley and Kaltenborn will be seeking more money and more say, Abiteboul will want more time, Horner will want Mercedes engines... or else, and Arrivabene will simply want Seb and Kimi to continue doing what they're doing.