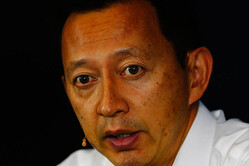 Luigi, if we can start with you, a great afternoon's work by Ferrari during second practice. Tell us about the work you have done today and are you surprised by the gap to Mercedes?

Luigi Fraboni: Well, of course, it was a good day for us, but it's just part of the weekend. Honestly I don't look a lot to the gap because it could be a consequence of a lot of parameters like fuel and all the tests you have to do for all the weekend. On our side of course we are very happy because we completed the programme, we have some new stuff to check, and now the engineers will check what are the results and then of course the final lap time is encouraging for the weekend.

Let's talk power units now. You've stolen a march on your rivals over the winter. How satisfying has that been and where has the improvement come from in the Ferrari power unit?
LF: Well, of course, it was a very tough job over the winter because we know that the general approach is to try to do well the maximum but also we know that we had to close some gap. And I think we have worked on everything. Finally, you need to work on energy, you need to work on power you need to work on reliability and we need to work on weight. So all these items are on our lists and we did really a lot and I'm very pleased that at the moment we have reached this result, which is not of course the result we would like to achieve at the end because you are still pushing and developing the engine.

Do you think your engine is more powerful than Mercedes' now?
LF: Well, difficult to say who is better or who is slower. I think the pace of the cars is quite similar in the last races and of course the evaluation of the power depends on track that you have and the car. But from our understanding we are there.

Mercedes still seems to have an advantage in qualifying. Would you agree with that statement and what are you doing to remedy that?
LF: Well, for sure, if you look at the three races they have done, they have an advantage. Where it comes from it's difficult to say. On the other side we are quite happy with the pace we have in the race and at the moment we don't want to step back in the race, so we try to continue on this line.

Thank you Luigi, and just before we move on, how was it to be on the podium?
LF: It was in Australia, it was great. It was my first podium. I have to say thanks to my team principal and all the team that gave me this opportunity I will never forget.

Fantastic. Let's move to Yusuke Hasegawa from Honda. These are frustrating times for Honda. You've introduced a new power unit for 2017, yet the performance is worse than last year. Was it a fundamental mistake to introduce this redesign?
Yusuke Hasegawa: It is a very tough question, especially after the Ferrari questions! But I don't think we made a complete mistake from last year's performance. We knew that we have to change everything, not only the package but also the combustion, so we tried to modify all areas. Some areas we succeeded, to reduce the weight and lower the COG, but yeah, definitely we couldn't get enough power from the combustion. So, yeah, it is just an excuse, but we still need time. But we don't think we made a huge mistake, the direction was right.

What about the progress you've made with the power unit so far this year?
YH: Obviously we didn't satisfy. We are very much disappointed with our current situation. But because the base concept is correct, we believe we can make good progress in the middle of the season.

Let's move on to another subject. There have been suggestions that you will supply a second team in 2018. The deadline for that is fast approaching. What can you tell us about this?
YH: From the start of this Formula One activity, we committed to support this Formula One society, so from that point of view it is duty and we have to support multiples teams. Also we are thinking it will give us some benefit to have multiple teams as we will have more data and more chance to make the car running, so we don't deny to have a second or third team.

Can you give us any insight into which teams you are talking to?
YH: We are talking to various teams but at this moment unfortunately we have nothing to say here.

Nick, this year there has been a lot of talk about the Renault power unit that perhaps might have overshadowed the progress you've made with the Renault chassis. How pleased are you with this year's car?
Nick Chester: Well, I'm pretty pleased. Obviously we came from a position last year where we were qualifying 15th and now we're qualifying up in seventh and there's been a lot of improvement in the chassis, obviously under these new regulations. But there's also been improvement on the power unit side as well. We're a works team and it's all about getting the package to work as well as we can.

The qualifying pace has been very good, you had both cars in Q3 last time out in Bahrain. But it seems you haven't been able to carry that pace through to the races. Why has that been the case and did you manage to make any progress with your race pace in the Bahrain test last week?
NC: Yeah, I think we have had good qualifyings and we haven't quite seen that in race pace. There are various reasons for it in how we look after the tyres and how we balance the car and we did make a bit of progress in the Bahrain test and we want to see some of that come through to the race here.

And just a quick word on Nico Hulkenberg. He's new to the team; you've worked with him for three races now. Are you impressed by him?
NC: Yeah, Nico's doing a great job. He's got very straight feedback, he knows what he wants from the car, he's quick straight away and he's doing a great job. That shouldn't take anything away from Jo, who is also doing a good job, but it's very nice to have Nico on board.

(Andrea Cremonesi - La Gazetta dello Sport) Luigi, I would like to ask you how is the approach with the substation of turbocharger, if there is a philosophy behind that you are using the third element of this - if it is just an aggressive move to gain maximum points in this part of the season, or maybe there is a problem that you modified? I remember that you change the unit in Bahrain for example after the Kimi fault.
LF: Well, at the moment we are facing the first races, let's say, some small problems that we have analysed and the changes we have done for the engine and for the turbo are just to be cautious because we are in a strategic part of the season and we don't want to make a mistake at the moment. And from what we seen at the moment we think that we should be in the fourth element of average components of the power unit up to the end of the season.

(Dieter Rencken - Racing Lines) Nick, how difficult is it to head up a technical team knowing that another team with an identical engine - i.e. there's no place to hide - is probably better resourced, certainly has better facilities and a lot more experience of the current formula. How difficult is it to motivate your team against that sort of competition and opposition?
NC: Well, in some ways it's quite easy to motivate ourselves because we have a real target. Red Bull have got a good car, they are a proper target, but we are really building up Enstone at the moment. We've taken good people on, we're building up the facilities and we've already made a good step into this year, so our target is just to get closer and close and catch them up.

(Dieter Rencken - Racing Lines) Hasegawa-san, if we have a look at the history of Honda in Formula One, it's been spectacularly successful for one campaign but for the rest it wasn't that successful. It's very easy to draw conclusions that this is, in fact, Honda's normal way of not being successful. If you look at the last campaign with they weren't successful, management had no issue with stopping the programme. How committed is top management actually, in view of the unsuccessful periods that you are currently experiencing?
YH: It is… not an easy question. I understand. Stopping the Formula One activity gave us huge damage of the technology catch-up, so that we really need to keep this activity for longer. At this moment our board is very much committed to this activity and, yeah, they are very supportive. It's no problem at all.

(Andrea Cremonesi - La Gazzetta Dello Sport) Luigi, about the development programme of the engine in recent years with the tokens the placse where you introduced the new engine was Montreal, I remember, Monza, for example. Is it going to remain the same without the token or is it changing a little bit?
LF: Well, for sure, as we said last year we are happy to take off the tokens so we have the possibility to continuously develop continuously the engine. So at the moment the problem is to bring the maximum that we can to every race. And then about how we split the power unit, that depends on how is our development in-house.

Luigi, given that there's no token system this year, how much more aggressive are you able to be with the development of the power unit?
LF: I think it's much more flexible on this side, so we try to take the opportunity. We are trying a lot more stuff knowing we are more free during the season, so for sure it was a good step for us.

(Michael Schmidt - Auto Motor und Sport) Following the question to the development at Ferrari, aren't you kind of restricted in the item of the turbocharger and the MGU-H because you have already three, so it means only one more upgrade in that area possible unless you want to use five or six?
LF: Well, of course, if you have three it means we are missing one, and then we do development we can for the missed one - but for us it is more important to do what we have done up to the moment, as I said, for strategic reasons.