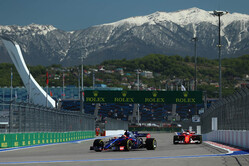 The big news is that before a wheel has turned, Ferrari has opted to change the turbochargers on both of its cars. Indeed, for reasons as yet unexplained, the turbos on the Haas cars have also been changed.

Changes at Honda also, where the beleaguered manufacturer is running new turbochargers and MGU-Hs on both cars following its numerous issues in Australia, China, Bahrain and all points west.

Only one reserve driver on duty today and understandably it is at Renault where Sergey Sirotkin replaces Nico Hulkenberg.

Another change of note is at Haas, where the American team is trying Carbone Industrie brakes in this session before deciding if it will use them for the remainder of the weekend.

As the lights go green Sirotkin is already waiting at then end of the pitlane, yet yields to Wehrlein, Magnussen, Ericsson, Vandoorne and Raikkonen.

As ever, teams are using this session (and FP2) for testing purposes particularly aero. The McLarens and Renaults are fitted with the 'garden gate' sensors while flo-vis abounds.

Sirotkin is told to avoid the kerbs, as Bottas posts the first time of the weekend (1:39.871). Shortly after, having encountered traffic, Hamilton posts 44.937.

"My engine is off," says Sirotkin as he pulls to the side of the track in T2, thereby bringing out the yellows.

The Russian is given a list of instructions in order that he can get going again, the calm voice over the radio uttering the equivalent of 'have you tried rebooting it?'

"It says there is a fault," says Sirotkin, but at this point the marshals take charge and push the Renault to safety.

Massa goes fifth (41.242) and Stroll sixth as the Williams is clearly struggling with understeer. The Canadian youngster had a major moment as he exited the final corner.

All running has been on softs thus far, and as Vettel posts 38.709 to go quickest the Mercedes duo switch to supersofts.

Raikkonen complains of a "lot of vibration" from his soft tyres.

Almost 30 minutes in, all but Sirotkin, Vandoorne, Alonso and Verstappen have posted times.

Going quickest in all three sectors, Bottas stops the clock at 36.119.

Ricciardo has a moment in the final corner but does well to hold it all together.

Talking of 'moments', Bottas has a major slide in T14 and somehow keeps it out of the barriers. Moments later teammate Hamilton runs wide in T2 and encounters the new kerbing in the process.

After forty minutes silence falls over the Autodrom as the drivers hand back their extra set of tyres.

Sainz, remember, has a three-place grid penalty this weekend following his clash with Stroll in Bahrain.

Following several (try thirteen) minutes of track inactivity, the sound - such as it is - of an F1 engine fills the air. It's Magnussen's Ferrari.

The Dane heads out, followed by Ocon and Stroll.

"We're seeing big track evolution," says Pirelli, "so times should come down in the last half-hour of the session."

Perez improves to fourth (37.457) as Grosjean complains of "something not quite right".

Vettel warns of bodywork on track as the camera cuts to the engine cover from Ocon's car which is lying by the side of the track after flying off the Force India.

When the session resumes, Vettel is quick out of the blocks, followed by the Mercedes duo.

The Red Bulls clearly struggling here, Verstappen can only manage sixth and teammate Ricciardo seventh, both over 1.5s off the pace.

No sooner has Hamilton been warned of debris at T4 than Vettel has a big spin inn T16, the German doing well to keep it all under control.

As we have seen before this year, when these cars step out they really go.

While all others are on supers, the Mercedes duo are back on the softs.

"The rear tyres are too hot, the front are too cold, it doesn't matter what I do," complains a frustrated Verstappen.

Business as usual at McLaren as Vandoorne warns "no power, no power".

"Ah **** Ferrari," sighs Sainz as he loses time behind Raikkonen.

A late improvement for Stroll who posts 37.944 to go ninth, just behind his Williams teammate.

As Hamilton runs wide, Vettel complains that something is "not quite right".

The session ends with Raikkonen quickest ahead of of Bottas, Hamilton, Verstappen, Vettel, Ricciardo, Perez, Massa, Stroll and Ocon.