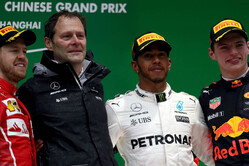 One thing you get to notice after a while however is that the same actors keep appearing in different roles in the various productions.

Consequently the stubborn, unsmiling detective in last night's Department Q, was the ruthless, arrogant, crooked banker in series one of Follow the Money.

Likewise the helpful fisherman last night, was the good guy in Beck but the ruthless assassin in Follow the Money.

And wasn't Beck the killer (spoiler) in the original Girl with the Dragon Tattoo?

You get the picture.

You get the picture.

Today might change that, but it has all to do with the weather gods as opposed to anything else.

As expected it is cold and wet, and it will remain that way for the next couple of hours.

This follows Friday's shenanigans when track running was severely compromised by the fact that the conditions meant the medical helicopter couldn't land in the designated hospital in Shanghai. This situation has now been resolved, which prompts the question why similar arrangements couldn't have been made before Friday.

Yesterday saw almost ideal conditions, and despite the knowledge that it would be wet today, drivers set their cars up for a dry qualifying in the hope of getting the best possible grid position.

So today, we have drivers who have not set their cars up for the conditions, and who had minimal - in some cases no - running on Friday.

To further spice things up, not only do we have the new rule whereby wet races will still start from the grid, but most drivers have had minimal - in some cases no - running on Pirelli's new wet tyres.

OK, there was a dedicated to wet testing in Barcelona, but this was on an artificially dampened track in sunshine which bore no resemblance to today. Furthermore, some drivers - yes, we mean you Lewis - were too ill to take part.

Consequently today we head into the great unknown.

While we would normally expect the usual suspects to excel in the conditions, the uncertainty over the wet tyres, particularly in terms of degradation, means that pretty much all bets are off.

One thing we can be sure off however, is that Max Verstappen, the hero of Interlagos last year, will be worth watching as he tries to move up through the field after qualifying 19th, though grid penalties for Palmer (yellow flag), Grosjean (same) and Giovinazzi (new gearbox) promote the Red Bull driver to 16th.

Having rained overnight and for much of the morning, it stopped raining an hour or so before the start of the race, but it remains damp, cold and blustery... like an English seaside down in summer, with the threat of further rain to follow.

Indeed, we could be in for a thriller today, and if it's anything like Brazil, or even last night's episode of Department Q we will not be complaining.

On the other hand, F1 has this ability - read tendency - to shoot itself in the foot, and one cannot help but wonder whether the move to a standing start - remember Spa 1998 - and the uncertainty over the new tyres, there's that niggling little feeling that the sport could get it wrong again today. After all, Friday was hardly a good advertisement.

Taking a moment out from the what ifs of today, it is worth pointing out something that Toto Wolff said yesterday after qualifying, when Valtteri Bottas lost out on the front row to Sebastian Vettel by just one-thousandth of a second.

The Austrian pointed out that despite all the rule changes, the months of work, the hundreds of millions of dollars, it all came down to one-thousandth of a second, which around this particular 5.451km (3.387 mile) track, comes down to 5.9 cm (just over 2 inches).

Air temperature is 12 degrees C, while the track temperature is 15 degrees. It is not raining, just damp. An added problem will be the standing water that has gathered on the main straight underneath the two bridges that link the grandstand with the paddock.

Indeed, being damp as opposed to raining, it looks like the Safety Car won't be needed, so we'll get a 'normal' start.

While Inters look likely to be the order of the day, Stoffel Vandoorne says slicks might be possible.

From the 'you couldn't make it up department', FOM's new technical boss, Ross Brawn, admits he doesn't know what the new wet start procedure is.

As Race Control reveals that there is a 20% chance of rain, Felipe Massa disagrees with Vandoorne over slicks at the start, though he admits a switch is likely ten minutes into the race.

Ahead of the warm-up lap, all are on Inters bar Sainz who is on supersofts.

"With no previous information it's going to be a question of thinking on your feet and calculated improvisation," admits Pirelli. "Or simply being very brave."

On-board, there do appear to be very few wet patches. Vettel, agrees with Sainz' choice. "It has dried up quite a bit," he says.

As the grid forms, Palmer heads into the pits to switch to slicks.