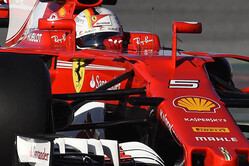 Ahead of today's practice session, the air temperature is 21 degrees C, while the track temperature is 33 degrees. Conditions are much improved on yesterday, indeed the sun is almost shining.

This morning should see lots of action as the teams make up for yesterday's wash-out, or whatever you want to call it, when the highlights were Lewis Hamilton throwing caps to the crowd, a fan in said crowd dressed as Darth Vader and the 'l' missing from a banner dedicated to Sebastian Vettel.

Of course, with this session being so busy, mistakes are likely.

To further complicate the issue, while today will see good weather conditions, tomorrow we are expecting to see conditions similar to those of Friday.

By the way, would you believe that editor Balfe has never seen any of the Star Wars films and had to Google Darth Vader.

The drivers form a queue at the end of the pitlane in anticipation of the green light, Palmer leading the way, ahead of Sainz, Grosjean, Bottas, Hamilton and Hulkenberg.

Darth Vader has a rival, there is a fan dressed as a Dutch lion dancing on one of the spectator banks.

As one might expect, with so little running yesterday, most teams have their drivers on split strategies, one of softs the others on supersofts.

Palmer gets things underway with a 44.420, but this is soon beaten by a number of drivers as all but Raikkonen stay out on track.

Raikkonen heads out again. The Finn is almost immediately told to cool his engine.

As Perez goes second (37.809), just seven minutes into the session, all but Raikkonen have posted a time.

Replay shows Bottas shedding his T-wing, which, as it happens, is a different T-wing to the version being run by teammate Hamilton.

Ricciardo has pitted and switched to supers. Currently, Vandoorne (fifth on 38.937) is the quickest supersoft runner.

For lap after lap the drivers remain on track, only pitting to change tyres before heading out again.

Now on the supersoft, Ricciardo goes quickest in the first two sectors, finally crossing the line at 35.647.

"In order to collect as much information as possible, most teams are splitting strategies and running different tyres," confirms Pirelli.

A spin for Palmer at T11 briefly brings out the yellows, as Raikkonen, Vettel, Alonso and Grosjean all pit.

Another improvement from Vandoorne sees the McLaren driver go third (37.852).

The Belgian is subsequently displaced as Stroll (softs) posts 37.799 to go third.

A spin for Ericsson as he seeks to improve on 19th.

With 36 minutes remaining, most of the drivers are now back in the pits. Sainz (14) has completed the most laps, with Alonso and Raikkonen the least (7).

"We've seen some graining in the past on a 'green' track in China; so that's something to keep an eye on in this session," warns Pirelli.

Bottas is back on track on softs, the Finn still running without his T-wing.

On supers, Raikkonen goes quickest in the first two sectors, finally crossing the line at 34.519, eclipsing Ricciardo by 1.128s.

As Raikkonen warns "we are suffering with the fronts still", teammate Vettel is the only other driver on track, both on the supersofts.

On his second flying lap, Raikkonen improves slightly to 34.476.

For a brief moment Alonso goes fourth (36.293) only to be demoted by Verstappen, Grosjean and Massa as the second wave gets underway. Of those 'improvers', only the Dutch driver and Grosjean are on softs.

On the supers, Ricciardo improves to fourth with 35.092, just ahead of his teammate.

Hamilton posts PBs in his first two sectors, finally crossing the line at 34.093 to leapfrog his Mercedes teammate but still 0.757s shy of the Melbourne winner.

Talking of whom, Vettel goes quickest in S1, but loses time in S2. Though quickest again in S3 he fails to improve.

A PB for Raikkonen in S1, and again in S2, the Finn maintains his pace in S3 to close to within 0.053s of his Ferrari teammate.

Big surprises thus far, with 12:00 remaining, are the Force Indias, both over 3.2s off the pace, while the Haas duo is also over 2.8s off.

Ahead of the final assault, the Red Bulls, Hulkenberg and Ocon are the only drivers on track, with just 8 minutes remaining.

Now on the supers, Verstappen posts PBs in the first two sectors, crossing the line at 34.946 to go fifth, still 1.6s off Vettel's pace.

With 5 minutes remaining all 20 drivers are on track.

Asked if he wants one more lap, Verstappen replies that his tyres are gone.

Bottas complains about traffic, claiming he lost time behind Verstappen.

A good showing from Williams, who sandwich the Red Bull duo, while the Force India are off the pace, behind the Renaults. Toro Rosso also off the pace.

All of which sets us up nicely for qualifying, what with the Ferraris separated by just 0.053s, and the Mercedes almost 0.4s down, though Hamilton could have gone quicker but for his lock-up at T14.

Then there's Red Bull under pressure from Williams, with Renault also looking stronger.