Changes to Shanghai track for 2017 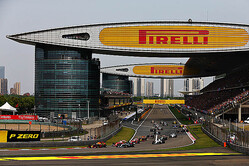 A number of minor modifications have been carried out ahead of this weekend's Chinese Grand Prix.

Most significantly, the track has been resurfaced across the start-line to remove the bump that had developed in the last couple of years.

Additionally, with an eye on the increased speeds under the new regulations, additional tyres have been installed in parts of the barriers at Turns 1 and 8.

Grass-Crete (grass concrete) has been laid around Turn 2 between the track and asphalt run-off, while additional 'combination' kerb elements have been installed behind the existing kerbs at Turns 2, 3 and 12. These new elements are 50mm higher than the existing kerbs and are approximately 3m long and 1m wide.

The DRS sectors are the same as last year, the detection point of the first zone is at Turn 12 and the activation point is 752m before Turn 14.

The second zone's detection point is 35m before Turn 16, with activation occurring 98m after Turn 16.