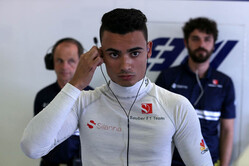 The Italian was an eleventh hour replacement for the German in Melbourne, when, following the first day's practice, Wehrlein told the Swiss team that he didn't feel he was fit enough to last a race distance as he continued his recovery following a crash during the Race of Champions in January.

Despite the lateness of his call-up, Giovinazzi did a superb job, almost making it to Q2 and finishing the race 12th, ahead of Stoffel Vandoorne.

Ahead of this weekend's Chinese Grand Prix Sauber has revealed that once again Giovinazzi will replace Wehrlein, who hopes to be back in the C36 for Bahrain.

"For me the most important thing is that I can train intensively to ensure a 100% performance from my side as soon as possible," said Wehrlein. "I will then be well-prepared for my first complete Grand Prix weekend for the team.

"Hopefully this can be in Bahrain but, if not, then we will take the time it needs until Russia to make sure I am completely ready.”

Having missed the first week of pre-season testing, the majority of the Melbourne weekend and now China, one cannot realistically see the German being fit for Bahrain which is just a week later.