Wehrlein given clearance to race 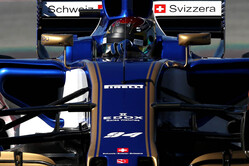 Pascal Wehrlein has been officially cleared to contest the Australian Grand Prix.

The German missed the opening test of the season as result of back pain following his heavy crash during the Race of Champions in Miami in January when he collided with Felipe Massa.

While he contested the second test, completing 192 laps, he had to undergo an FIA medical examination today in order to be given clearance to take part.

"I was never in doubt," he told reporters having been given the all-clear. "I was training a lot this winter and though yes maybe for a few weeks I didn't train as hard as I would have liked I've been back in training for a few weeks now."

"Definitely the work I did before my injury paid off," he added.