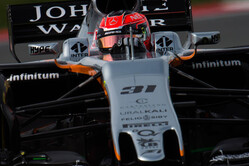 Though not impressing on the same level as Fernando Alonso did all those years ago with Minardi, Esteban Ocon made a good impression in the latter half of 2016 when he was brought in to replace Rio Haryanto.

Indeed, the French youngster's arrival appeared to kick new life into Pascal Wehrlein, who for the most part had not left the Indonesian youngster for dust as most had expected.

"Starting my F1 career with Manor was already something great," he told the official F1 website, "and then at the end of 2016 I got that chance from Force India.

"That means an amazing opportunity for me, as a young driver to join a successful team, and alongside Checo Perez, who is very experienced.

"He had an awesome season last year," he continued. "He pulled the team up. It was very impressive to see what he did. Every year Force India is gaining position, so I am looking forward to working with him. I have learnt a lot from him already at the two tests - but testing is one thing: it's as soon as we arrive at the first race that I want to challenge him!"

Asked about cooperation with the Mexican, he admitted: "We go through data, we discuss our findings from every session. His feedback is really great.

"Hence the good preparation with the team over the winter. In the end results translate into more funds - and that means a better, faster car. It is that simple."

Asked about that "good preparation" over the winter, he replies: "We had two months to prepare for the season, so I did a lot of training and in between did some simulator work and some briefing with the team. I met everyone in the team - everybody, including the aero department, to find out who was doing what and is responsible for what. I have to confess I don't know all the names now as it is a bigger team than Manor, but I am working hard on it!"

Asked the importance of those few races with the ailing Manor team, he admits they were "extremely important".

"Manor was really great, because they were pushing so hard as it meant nothing less than their survival," he continues. "With the budget they had they worked extremely well, very professional. For me it meant that I learned all the aspects of Formula One in a crash course. I am really sad that Manor is no longer on the grid."

Asked about the failure of his former teammate, Pascal Wehrlein, who was rejected by Force India and will instead drive for Sauber, Ocon is giving little away.

"I cannot say anything in that respect," he replies. "Force India chose me. That's all there is to it. I am happy for Pascal that he got himself a seat too."

Despite only three days in the car, Ocon had the eighth highest mileage in Barcelona, the Frenchman completing 365 laps, 142 on one day alone.

"Oh, it was fantastic to do 142 laps after I was only able to do 80 laps in the first week," he admits. "We did everything, every aspect from tyres, to aerodynamics to performance runs.

"At one point you lose the feeling for time," he continues. "At Barcelona's pit-lane exit there is that tower that shows the positions in the race and has a clock on top - and when I looked up it was, 'Wow - I've already been in the car for hours.' I didn't notice that time was flying so fast. But the next day I got some reminders from my neck!"

Asked his personal target for the season ahead, despite his near-rookie status it is unsurprisingly ambitious.

"To score points at every race," he replies. "That would be pretty cool.

"Melbourne is the place where everybody unleashes his machine, so we will see what the reality check is. I have a super feeling about the VJM10. The balance is right and the Mercedes engine is simply the best, also when it comes to reliability. So let's see if I can trust my feelings."