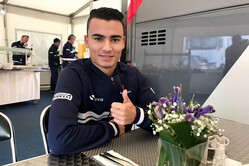 Sauber has confirmed that Pascal Wehrlein will participate in this week's final test at Barcelona.

The German was forced to miss the opening test as he was still suffering back pains following his crash during the Race of Champions in Miami in January.

On Sunday the German posted a picture on Twitter along with the words "Working hard to come back soon ".

This morning, Sauber, again via social media, confirmed that Wehrlein will participate in this week's final test.

"We are pleased to inform that Pascal will be ready to hit the track with the #C36 tomorrow," tweeted the Hinwil outfit.

It's understood that Ferrari reserve, Antonio Giovinazzi, who deputised for Wehrlein last week, will be on hand in Barcelona in case the German suffers a reoccurrence of his back pain.