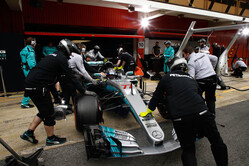 After all these years, it's a trap we still fall into, focussing on the name at the top of the timesheets and in particular his time.

However, it's no use being the quickest out there if you are not going to go the distance... as the old adage goes, 'to finish first, first you have to finish'.

That said, as has become the norm in recent years the name at the top of the sheets in terms of times is also right up there in terms of reliability.

Due to his 'electrical issue' on Thursday, not only has Lewis Hamilton missed out on the fastest time of the week in Barcelona, he has also lost out in terms of covering the most mileage, both honours going to teammate Valtteri Bottas, the Finn not only being fastest but completing 324 laps, 57 more than his nearest rival, Sebastian Vettel..

While Mercedes and Ferrari covered well over a thousand miles over the four days, McLaren could only manage 601 and Toro Rosso 529, and bear in mind, the average Grand Prix is around 190 miles (310kms) and this year drivers are limited to 4 units before incurring penalties.

Between them the Mercedes powered teams managed 1049 laps, with Ferrari second best on 810, Honda - albeit only supplying one team - couldn't manage 200.

The times are important, but even more so is reliability, and once again Mercedes is showing ominous strength in both areas.