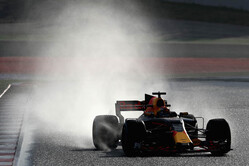 Trying desperately not to sound high and mighty or that this was written whilst seated on a very tall horse, one cannot help but wonder what exactly the point of this morning's wet session really was.

We say wet, whereas it was actually merely damp. Though water tankers had begun soaking the track shortly after yesterday's session ended, just over an hour into this morning’s session drivers were searching out wet patches as the track dried, and an hour later Kimi Raikkonen was the first driver to make the switch to slicks.

Meanwhile, Mercedes revealed that an "electrical issue" was preventing it from running.

Now, whilst some might see this as the first sign of a chink in the W08's armour, it's worth noting that speaking to reporters last night Lewis Hamilton admitted that he wasn't looking forward to today's session.

"I'm not particularly looking forward to it," he admitted. "I drove some demonstration wet tyres at Silverstone and they didn’t feel great.

"I’m out first unfortunately," he grimaced, "I might fake a pulled muscle in the morning and let Valtteri do it."

Three hours into the session, the Briton tweeted: "Electrical fault kept us in the garage this morning, so I've decided with the team not to drive today as I wouldn't have learned much.

"Shame not to drive but it's been a great few days. The guys have done an awesome job. Can't wait to be back in the car next week!"

However, just over thirty minutes later, the 'electrical issue' clearly resolved, Valtteri Bottas headed out in the Silver Arrow.

Let's not forget, that other than Mercedes (and Pirelli's) need for data, fans have paid to watch today's 'action'.

The conditions didn't result in any incidents of note, but then again, it was only damp not exactly wet.

Once on slicks, Raikkonen was the pace-setter, with Stoffel Vandoorne making a late charge to take third.

Other than Mercedes electrical issue, and Williams withdrawal following the damage incurred yesterday, the only other team to encounter an issue was Toro Rosso where Daniil Kvyat managed just one lap.

To add to the frustration following what has to be regarded as a questionably valuable morning, just before the lunch break it was revealed that the track will be watered once again.

While it is highly doubtful that the water being used is the grade-A drinking stuff, fact is it is water and thousands of gallons of it are being used to create so-so conditions that aren't convincing anyone.

Whereas Paul Ricard - to which F1 returns next year - has a sprinkler system whereby wet conditions can be recreated and maintained, what we had here was a track that started merely damp and quickly dried.

The fact that we are going through pantomime again this afternoon simply beggars belief.

If they really wanted wet conditions, and Paul Ricard was out of the question, they should have headed to Silverstone, better still Ingliston.