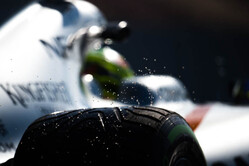 While, from the outside, yesterday's somewhat farcical 'damp weather' test didn't appear to give much information, it seems that from the running they did drivers were fairly happy, though there was concern that the intermediates had a worryingly short life.

Nonetheless, Pirelli is planning on having new wets available in time for the second round of the 2017 season, the Chinese Grand Prix, albeit for testing.

Prototype wets were run during the tests carried out by Red Bull, Mercedes and Ferrari last year, but thus far the only running of the actual wets scheduled to be used this season was yesterday and Ferrari's test at Fiorano early last month which had to be abandoned when Sebastian Vettel crashed out.

Speaking after yesterday's unconvincing wet test, Pirelli Motorsport boss Paul Hembery said that he hoped new wet tyre could be introduced in time for testing in time for China but would most probably not be used (for racing) until later in the season.

"We have to change the working range of the compounds," he said, according to Motorsport.com. "We were going to do that on the full rain tyre anyway.

"It's something we had been working on, particularly knowing we have got the standing starts," he continued.

"Also, some of the comments from last season were that the drivers can't switch them on when they come through. We have been working on that and what we saw today was that the intermediate was also struggling," he admitted. "That is an effect of the width of the tyre, because the inter was the one the drivers said, 'don't touch, don't change because we're very happy with it'. Now we know we probably need to alter as well to match it."

The Briton suggested that along with the inters - even though drivers were not generally happy with their performance yesterday - there could be scope for two types of wet tyre.

"There is probably a situation where you almost want to have two types of wet compounds," he said, "one for the warmer wet conditions and one for Silverstone and Spa where conditions are a lot cooler.

"I believe we will have something ready for China in terms of the first compound change here, and what we have been developing will go to the final result as something we can introduce."