Ricciardo: It's going to increase everything 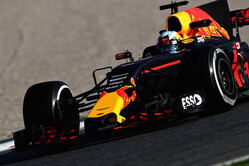 Refusing to be drawn into making any kind of prediction as to where his team stands in relation to Mercedes, or any of the others, following the opening pre-season test in Barcelona, Daniel Ricciardo admits to being mighty impressed with the new cars.

"On the first day it was a bit too early to say whether the new cars really ticked all of the boxes the rule changes had in mind," he admits in a special feature for Red Bull, "but by my second day in the car, day three, I think I realised more of the potential of what these cars could be.

"It made me realise that the high-speed corners will be as quick as they've ever been, maybe even quicker," he enthuses. "Take Turn 3 at Barcelona for example - and we weren't exactly cruising through there before - Turn 3 last week was completely flat, no lift off the throttle at all.

"I haven't compared last year's data to this year's," he admits, "but it wouldn't surprise me if we were 35-40km/h quicker through there, and it was already a 220km/h corner last year with a big lift.

"It's a big jump, not a gradual one, and things will be coming at us pretty quickly at some circuits, that's for sure.

"It's going to increase everything... the intensity, the physicality, the fatigue factor, and I welcome that. It's cool, and it's what Formula One should be.

"We'll all adapt," he insists, "but there's no masking that it'll be a much more physical task this year, and that's good for the fans and for us drivers.

"Now that I have a taste for the 2017 car, I keep thinking of some of the other tracks we go to and what will be a big challenge for us. Sector two at Spa, downhill, Pouhon, that's one of my favourite corners anyway, and we'll have a chance to be full throttle through there – how good will that be!

"If we have a headwind into any of the big corners we come across, it makes a massive difference as to how full on the throttle we can be.

"Albert Park in a few weeks will be different because it's a lot more stop-start than Barcelona is, but across the back of the circuit at the chicane, that'll be pretty lively. The first part will be maybe a little downshift into sixth, the second part might be an upshift into seventh. A good place to be watching, I reckon. Mid-200s through there... the high-speed stuff is going to keep me pretty excited this year!"

Asked the inevitable, he admits: "Where do Red Bull sit compared to the others? I’m not 100 per cent sure, and nobody will be until we hit qualifying in Melbourne. Same as every year. Are we going to win in Australia by two laps? No, much as that would be awesome (I'll take it if anyone's offering. But we’re going to be pretty competitive. And now that I’ve had a chance to sample the new cars, I’m looking forward more than usual to my home GP.

"We had a few issues pop up on the days I was in the car," he admits, "so I haven't done a full race distance yet, the most laps I did in one stint was 18. But I know enough to know what these cars are going to be like, and my enthusiasm is pretty high, not that it was lacking before."