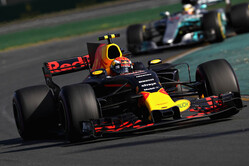 Valtteri Bottas believes it was the nature of the Melbourne track that hindered overtaking, not the new rules.

While almost all the drivers have complained about how the new rules are impacting overtaking, leaving them unable to get within the 2s margin needed for DRS because of the instability created by the dirty air form the car ahead, Mercedes' Valtteri Bottas has said that much of the issue in Melbourne was due to the nature of the track.

"In general it will be a little more difficult, but it will depend on tracks," he said. "Those circuits with really long straights will see very good racing because slipstreaming has a bigger effect now, and DRS does too with these rear wings.

"So some places we will see good racing and some places like Barcelona it will be very difficult to overtake," he admitted. "Let's wait a few more races and see how the racing goes. Obviously (in Australia) it was more tricky than last year.

"When you are in the same car, with similar tyres, it's extremely difficult at a track like this," he explained. "With the new cars, it's more difficult to follow once you're within two seconds, as you lose quite a large amount of grip. So we need big pace difference to really go for it to try and overtake. I think it's a bit of a shame."