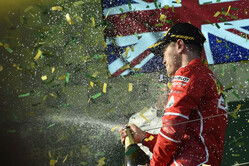 Australian Grand Prix officials have confirmed that they have launched an investigation into how hundreds of spectators found their way onto the circuit at the end of today’s race.

As Sebastian Vettel completed his cool down lap, having taken victory in the opening race of the season, the Ferrari driver was confronted with hoards of spectators who’d climbed over and through fencing in the final third of the track.

"When I was coming back to the pits there were people running on track going wild with Ferrari flags, it was unbelievable," said race winner Vettel on the podium.

However, race officials were not as impressed as the Ferrari star.

"I am concerned because we have very, very strict processes that for 21 races have worked beautifully so something went amiss," Australian Grand Prix chief executive Andrew Westacott, told the Speedcafe publication.

"We don’t know what yet, but we have got an investigation happening with our people, including CAMS, who obviously look after the track from a race organisation point of view and a race control point of view."

Closed circuit television is used extensively around the Albert Park circuit, primarily for judicial purposes in Race Control, but which can be harnessed to help organisers understand how the crowd broke through.

Early indications are that confusion among officials over when to open the temporary street circuit to the public, who have historically poured onto the front straight to celebrate underneath the podium, saw fans released onto the track before the cars had returned to pit lane.

"From what I am led to believe, there could have been a mistake made in the signals as to when people could exit onto the track," Westacott explained. "That is being investigated, so I won’t speculate on the outcome of that until I have all the facts.

"We have CCTV, we have radio logs and other things so we can understand what happened."