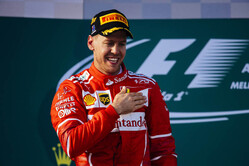 It was the Spanish philosopher George Santayana who said that those who do not learn from history are doomed to repeat it.

A year ago, Ferrari came away from pre-season testing as pace-setters, even though reliability was somewhat iffy.

Though the Mercedes duo filled the front row of the grid the Ferraris got the better of them at the start. For a few short laps it seemed not so much that the Silver Arrows reign was over but that at least they faced a credible challenge.

As the afternoon progressed, Kimi Raikkonen suffered an airbox fire and Sebastian Vettel suffered a monumental strategic failure which cost him the win. By season end, having never once stood on the top step of the podium, the Italian team had been surpassed by Red Bull.

Has Ferrari learned from history?

We never expected Mercedes to have lost its edge, or Lewis Hamilton for that matter, and therefore the Briton and the Silver Arrows remain hot favourites. Already some are jumping on Valtteri Bottas' back, waiting for every little sign, but the fact is we know the Finn is fast. However, has he got that extra little thing that is the stuff of champions.

While Red Bull might well surpass Ferrari by season end should the Maranello outfit not learn from its past, there is little chance of that happening today. Other than Daniel Ricciardo starting 15th, a combination of his Q3 crash and a subsequent new gearbox penalty, the local hero has it all to do. Max Verstappen, though starting from fifth, is clearly unhappy with the car and a result is likely to be frustrated by both poor reliability and over enthusiasm and frustration.

Next up come two of the best performances from qualifying, Romain Grosjean and Felipe Massa. While we are sure to hear the usual moaning over the radio from the Frenchman we can be sure that he will give it all he can, while watching Felipe Massa yesterday it was hard to believe the sport had been willing to let him go last year.

In both cases, the veterans showed their teammates how it should be done, though we refuse to get caught up in the Stroll-bashing. Give him time.

Great performances from the Toro Rosso also, the STR12 proving - like the Mercedes - that a car can be effective as well as pretty. However, like Red Bull and Renault, there remain fears over the reliability of the French manufacturer's power unit, no matter what badge it might be sporting.

Early days, but Force India has been disappointing thus far, sadly the only way the VJM10 has managed to attract attention thus far being the Lady Penelope paint job.

That said, whatever happens out front - today and for the remainder of the season - we can expect a titanic battle throughout the midfield with the Silverstone-based outfit in the thick of it.

A mixed day for Renault, and while Nico Hulkenberg seems to fit in perfectly, Jolyon Palmer has had a nightmare weekend thus far, and his open criticism of the car will not endear him to the French outfit.

As ever, Fernando Alonso gave it 100%, his drive to thirteenth a monumental effort. However, other than a lack of power there remains the question of the Honda's reliability, the Spaniard and his Belgian teammate facing a tough afternoon.

What with the numerous issues facing the team, what a superb effort by the Sauber drivers, and in particular Antonio Giovinazzi who stepped into Pascal Wehrlein's seat at the eleventh hour. The Italian has admitted that when he got the call telling him he was driving he thought it was an early April Fool.

Along with Massa and Grosjean, Giovinazzi was one of the true stars yesterday.

We often think of that when writing, because whatever you write is bound to annoy some of the people. Therefore, when we say that the sport needs to see someone other than Mercedes winning we are not expressing bias, merely that we want to see the silver cars challenged.

That said, it has to be done fair and square and not by means of gimmicks, certainly the success ballast Ross Brawn is seriously thinking about.

At a time of great uncertainty, especially when one looks at some of the changes its new owners have planned - you will not believe where the next new addition to the calendar is located - let's hope that today we get a show that will whet the appetites of all of us for the season ahead.

Even if the silver cars are first and second, let's hope they are put under pressure from lights to flag. Let us also hope that there are no post-race protests.

For what it's worth, for some time we have had the impression that Ferrari is going about things differently this year; gone are the predictions, gone are the promises. Indeed, for the most part the Maranello outfit has maintained radio silence.

Let us hope, if only for the good of 'the show' that the Italian team now intends doing its talking on track... and that in time, Red Bull can join in the fun.

And in terms of that midfield battle, let's just enjoy the show.

The pitlane opens and one by one the drivers head out, the two main combatants, Hamilton and Vettel, among the first.

After two days of mostly overcast conditions, it is bright and sunny today. Air temperature is 23 degrees C, while the track temperature is 38 degrees.

"I can't see very much," complains Verstappen, "I've got a flat spotted tyre."

Meanwhile, after two years of Daniil Kvyat not making it to the grid, this time around it looks as though Ricciardo might be the non-starter, the Australian has stopped out on track. "I'm stuck in gear," he reveals as he grinds to a halt.

Problems for Grosjean also who claims his clutch is not fully engaging.

On the grid, Ricciardo's crew are already packing their kit away and heading back to the pitlane. On the other side of the track, Ricciardo is out of his car, his race over before it began.

"Daniel stops on track with an electrical issue," tweets Red Bull. "Car back and Team pushing to get the RB13 fixed to start from the pit lane." Indeed, the camera catches the Australian climbing into his car.

All are on ultrasofts, bar Ricciardo and Stroll who are on supersofts and Giovinazzi, Magnussen and Palmer who are on softs.

The head off on the parade lap, all getting away.