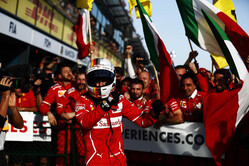 Sebastian Vettel won the Australian Grand Prix for Ferrari by completing a longer opening stint on the ultrasoft tyre than polesitter Lewis Hamilton, then emerging in front of the Mercedes after his sole pit stop. All the finishers apart from two stopped once, with the top four using an ultrasoft-soft strategy.

All three compounds were used in the race, with the fastest lap - set right at the end of the race - more than two seconds quicker than last year. Most drivers started on the ultrasoft, with Sauber's Formula 1 debutant Antonio Giovinazzi the highest placed finisher to start on the soft.

Mario Isola: "Formula 1's new era made a fantastic start in Australia, with close racing and the drivers able to push hard from the start to the finish of each stint. As we expected most drivers adopted different variations of a one-stop strategy, with the leaders moving onto the soft for the second stint in order to be certain of running to the end. There was low wear and degradation on a circuit that is never particularly hard on tyres anyway, with the drivers able to set fastest laps at the very end of the race on the soft compound that was more than 30 laps old."