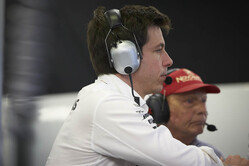 It was two years ago, on the podium in Melbourne, that race winner Lewis Hamilton persuaded podium interviewer Arnold Schwarzenegger to utter the immortal words: "I'll be back!"

Two years down the line and while it is Mark Webber performing the MC duties, that same icy cry of defiance could be heard down the pitlane.

No, Schwarzenegger was not visiting, rather his countryman Toto Wolff, whose voice is uncannily similar, was reacting to his team's shock defeat.

Earlier in the afternoon, as Lewis Hamilton found himself stuck behind Max Verstappen's Red Bull, unable to make a move on the Dutchman courtesy of the aerodynamic issues that look set to plague the season, Wolff, in true Terminator style, slammed his fist in frustration.

As Vettel and Ferrari enjoyed a famous victory that has kicked new life into the sport, Wolff paraphrased Schwarzenegger as he vowed his team is not about to surrender.

"We will come back stronger," he told reporters. "We didn't have great testing and we didn't have a great Sunday, but we will leave no stone unturned in order to win more.

"It's personality-building," he said of the defeat, Ferrari finally having shown its hand. "You lose some and you win some.

"We have been very fortunate in the last three years that we won most of the races," he continued. "Now it's about accepting that here Ferrari beat us.

"Today, Sebastian and Ferrari were well-deserved winners. From the early stages of the race, it was clear that Sebastian was very quick because Lewis wasn't able to pull away. Sebastian came into the window where the undercut was possible and we had the feeling at that point that the tyres were not lasting.

"It was the team's impression on the pit wall looking at the data and Lewis' in the car, too. So that was when, with all the clear risks of coming out in traffic, we took the decision to come in.

"We were between a rock and a hard place, really, and we went for it. But Ferrari played it very well - and they had the quicker car today.

"After that, we seemed to pick up in performance on the Soft tyres. Lewis managed everything perfectly and I must compliment Valtteri, too - he showed really good pace, made no mistakes through the whole weekend and got his first podium with the team in his first race.

Now, the job for us is to learn the lessons from this race, understand why we didn't perform to our maximum today and keep working hard to improve the car in every area."