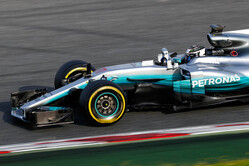 Ahead of his Mercedes race debut, Valtteri Bottas is confident the team will allow him to race teammate Lewis Hamilton.

While Mercedes has said that its two drivers are free to race, many, with an eye on the pre-season form of Ferrari, believe that the German team must learn from its past mistakes and not allow the rivalry between its two drivers to descend into outright warfare.

Though Hamilton describes Bottas as the best teammate he's ever had, that can soon change should the Finn prove to be stiffer competition than expected, far less get the better of the temperamental Briton.

Bottas insists that the team has told the pair they are free to race, that neither driver has preference and he believes it.

"I don't fear that," he told reporters, "I think Mercedes doesn't have a number one or number two driver and that's pretty much up to me to perform

"As long as I do my job so that my performance on track is at the level the car should be, we're all good," he added.

Asked about Hamilton's (rare) praise, the Finn admitted: "So far it has been very good. In testing we managed to work well as a team and there was a good team spirit the whole time. I see no reason why it shouldn't continue like that.

"For me it's a great opportunity," he continued. "For sure it's a big challenge, there's no doubt I will definitely need to prove myself to a lot of people and to the team that I deserve the place, but I just see things very positively. I see it as a great opportunity for my career to fight for wins and hopefully even for the championship.

"Going against Lewis, I am pretty excited about that. He's a three-time world champion, he's a great reference and everyone knows how good he is as a driver. So it's great to be the teammate to Lewis and I just wish we can have a very strong year in this new era of Formula One."