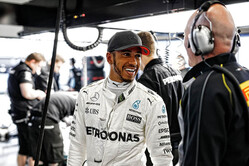 With the medical helicopter unable to land at the designated hospital in Shanghai, there was no running in today's second practice session.

This morning session had been seriously compromised by the weather which meant the medical helicopter was unable to land at the designated hospital in Shanghai, and as a result we only got around 40 minutes of running. Among those who didn't post a time were the Force Indias, Ferraris and Lewis Hamilton.

However, worse was to follow with absolutely no running this afternoon as the situation continued.

Just moments before the start of the session race control once again announced that there was an issue, confirming that the start had been delayed. However, with no improvement, not a single wheel was turned, not a single engine fired up.

Fifty minutes into the session the most excitement was a banner in the grandstand facing the Ferrari garage dedicated to Sebastian Vettel. Unfortunately, the final 'l' was missing, but finally, much to the delight of the man himself, it was located.

Then there was the fan wearing a Red Bull shirt and Darth Vader helmet. No, us neither.

Finally, the crowd erupted but not because a car was finally emerging, rather Lewis Hamilton has climbed the pit-wall to take some pictures of said crowd.

Shortly after the British driver headed across the track to take some selfies with the crowd.

As the Mercedes driver filmed the crowd, even throwing caps to them, having signed them on camera, the only ones enjoying the 'spectacle' will have been Liberty... how to turn a bad situation into a good one.

Other drivers and teams please note.

With ten minutes remaining, the session was scrapped.

Consequently, while tomorrow's sessions look unlikely to be affected, with the threat of rain again on Sunday, one wonders what contingency plans there are should a similar issue arise.