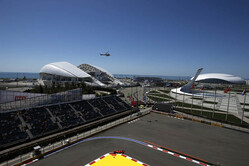 Kimi Raikkonen was the pace-setter in FP1, finishing ahead of the Mercedes duo. Indeed, not only did the Finn out-pace his Ferrari teammate, so too Valtteri Bottas was the quicker of the Mercedes drivers.

It's fair to say that most drivers struggled for grip with even the best caught out, Sebastian Vettel spinning and Lewis Hamilton running wide.

At Force India, Esteban Ocon struggled to keep his engine cover on the car, the unit flying off and causing the session to be red flagged.

Sergey Sirotkin was on duty for Renault, replacing Nico Hulkenberg, however, the Russian stopped on track after just two laps failing to post a time.

This morning was all about the softs and supersofts, which means that over the next ninety minutes we'll get to see the ultrasofts for the second time this year.

Five minutes before the start of the session, Honda tweets: "Final car prep for Alonso before the FP2 green light. A delay for Vandoorne but setup laps planned."

The Belgian is facing a 15-place grid penalty after Honda opted to change his engine following an MGU-K issue earlier.

The lights go green and Magnussen and Hulkenberg lead the way.

Haas used the Carbone Industrie brakes in FP1 and we're not entirely sure if they have switched back to Brembo since.

Aa Raikkonen improves to 35.980, Grosjean is apoplectic as he moans about his continuing brake problem.

"I completely lost it into Turn 3 and 4, completely!" he wails. "What the hell is going on?"

Out come the yellows as Kvyat spins at T13. "Something is is wrong," says the Russian, "with the rear definitely".

In the meantime Bottas has split the Ferraris with a 36.283.

Hamilton is only quickest in the final sector, nonetheless a 35.752 sees him go quickest.

Bottas goes wide at T2 and takes a trip over the new kerbs, the Mercedes not taking kindly to the experience.

No sooner has Alonso left the pits than teammate Vandoorne follows, great work by the McLaren crew.

Once again Hamilton is quickest in the final sector only, improving slightly to 35.710.

In sixth, Ricciardo is told "there is room for improvement" in turns 15 and 16.

Taking the advice, the Australian improves to third with a 36.224.

Twenty-three minutes into the session, Raikkonen is first to switch to the purple-banded ultrasofts.

"These conditions will be similar to qualifying and the race," says Pirelli, "so this is the most useful free practice session of the three."

Understandably, the Finn is quickest in the first two sectors and again in the third, crossing the line at 34.721, 0.989s quicker than Hamilton.

Vettel, also on the ultras, fails to improve, the German not even managing a PB in a single sector.

Next time around however he ups the pace, as does Raikkonen. The Finn posts 34.383 with Vettel posting 34.480 moments later.

Bottas is advised that Raikkonen's quickest time came on his third lap. At which point Vettel goes quickest in the first two sectors, finally crossing the line at 34.120.

Palmer improves to ninth, the Renault driver gaining 2s with the purple rubber.

Behind the usual suspects, Hulkenberg is seventh, ahead of Perez, Ocon, Palmer, Verstappen and Sainz.