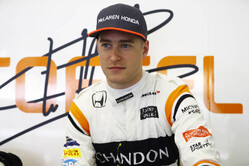 Following yesterday's qualifying session, in which the Belgian finished 19th, McLaren opted to change the engine in his car.

It is the second successive race in which the youngster has been penalised, the McLaren driver incurring a 15-place grid penalty in Sochi.