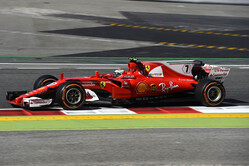 Lewis Hamilton was the pace-setter in both of yesterday's sessions as - despite the various upgrade packages - the order had a pretty familiar ring about it; Mercedes, Ferrari and Red Bull.

Admittedly, Mercedes appears to have edged slightly ahead while Red Bull appears to have closed on Ferrari, but in both case we stress the word 'appears'. It won't be until Q2 and Q3 this afternoon that the picture becomes clearer.

Nonetheless, the Mercedes drivers seems happier than their Ferrari counterparts while we know that the Red Bull are never entirely happy.

That said, an electrics issue on Bottas' car means the Finn's crew have worked for much of the night, and in the final minutes before the start of the session work is still ongoing indeed, the Sochi winner is unlikely to appear until later in the session.

While Haas was best of the rest in FP1, the honours fell to Renault in the second session, the midfield battle as close and unpredictable as ever,

The day was not without its problems, both in terms of technical issues and the wind. Drivers already struggling for grip on what they consider unnecessarily hard tyres for this track, had their job made just that little bit trickier courtesy of some very gusty winds, especially at T13.

In an attempt to help the drivers with grip, Pirelli has lowered the minimum tyre pressure limit so they are a little closer to what they were in pre-season testing.

The lights go green and Grosjean is first out, followed by Ericsson, Magnussen, Wehrlein and Sainz. More and more drivers head out, all on the hard rubber.

"We had an electrical fault on VB's Power Unit last night," confirms Mercedes. "To fix it, we broke the curfew, and it was resolved.

"However," the German team subsequently adds, "in putting the engine back together we discovered a small water leak.

"So we have put the previous power unit - used at the first four races - back into his car. We hope to get him out for FP3."

Alonso is among the early risers, the Spaniard warmly greeted by his thousands of countrymen that line the track.

He responds by posting the first time of the day, the two-time champ stopping the clock at 1:29.225.

Vandoorne (mediums) splits the Force India duo with a 25.039, the Belgian quickest in S3.

Overnight the FIA has extended the pit straight DRS zone by 100 metres, though some of the drivers appear not have been made aware. Ocon being told that he was late in using DRS in both zones.

On the medium rubber, Ferrari goers 1-2 with Raikkonen leading the way, the Finn posting 22.494. He subsequently improves to 22.409, almost a second clear of his teammate.

As work continues on Bottas' car, Hamilton heads out again, the Briton one of 8 drivers yet to post a time after 21 minutes of running.

The first driver to make the switch to softs, Stroll posts 23.885 to go fifth.

A big lock-up for Wehrlein sees the German obey the strict rules in terms of rejoining the track at T2.

Despite going quickest in S1, Hamilton fails to improve having lost time in traffic in S3.

With 24:00 remaining, Raikkonen heads out on a brand new set of softs.

Unsurprisingly the Finn is quickest in all three sectors, crossing the line at 20.214.

Attention turns to Vettel who is also on the yellow-banded rubber. Quickest in S1 he loses time in S2 possibly distracted by Ocon, crossing the line at 20.456, 0.242s down on his teammate.

On his next assault Raikkonen is unable to improve the Finn complaining about traffic.

As Hamilton makes the switch to softs, so too does Hulkenberg, the German currently down in 17th.

"Most of the drivers have been doing longer runs on the medium tyre," advises Pirelli, "but we're now going to see a few qualifying simulations on soft."