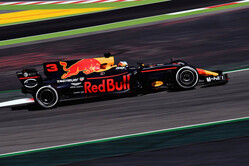 This being the start of the European season, the motor homes are back, providing sanctuary for the teams, their drivers and sponsors... and as ever, the bigger the team the grander its motorhome.

This being the start of the European season also sees the first major upgrades of the year, and the early signs are that Mercedes is upping the ante.

While attention was expected to focus on the so-called B-spec chassis from Red Bull, it is the German team which has grabbed attention with a raft of updates including a new engine. Clearly, the Brackley outfit will not relinquish its titles without a fight.

Something else new for this weekend is the improved driver identification, with the drivers' names and numbers - even nationalities in some cases - on display for the fans (and journos).

With all those updates today is going be about testing, possibly much of it back-to-back as the teams try to evaluate the new bits with what they are replacing. It also means buckets of flo-vis, sensors and stop-start running.

Only one reserve driver on duty this morning, Sergey Sirotkin replacing Jolyon Palmer in the Renault. Due to technical issues, the Russian only managed two laps in Sochi, while the Briton didn't fare much better, being taken out by Romain Grosjean on the first lap of the race.

We tweet that the word 'VAN' on the side of the McLaren MCL32 never seemed more appropriate.

In no time at all there are 15 drivers on track. As expected, it's going to be busy, busy, busy.

As expected, it is a significant upgrade for Red Bull; bargeboards, wings, engine cover etc, but hardly a B-spec.

Before Monsieur Moany can get a word in, teammate Magnussen complains: "There's absolutely no grip!" Like his rivals he is on the hard rubber.

Soon all but Alonso have been out. Indeed, just 8 minutes in we already have our first timed lap, a 1:27.199 from Massa. Moments later teammate Stroll posts 33.435.

More woe for McLaren and Alonso, on his out lap the McLaren has stopped at T3 in a cloud of white smoke. There also appears to be oil leaking from the rear of the car as the Spaniard wearily climbs out.

Replay shows the McLaren virtually seizing up as it rounded T2, sending the Spaniard into a spin, the smoke clearly a mixture of oil, brake dust and rubber.

As the car is lifted by a crane, oil pours from the rear, suggesting a significant failure.

Meanwhile, Vettel has gone second and Grosjean fourth while Massa continues to raise the bar, the Brazilian posting 25.894.

A big lock-up for Grosjean at T13, Haas having opted to stick with Brembo... for now.

A problem for Vettel? As he heads out of the pitlane the German suddenly pulls to the side. As he advises his team of a gearbox issue - and is passed by teammate Raikkonen - mechanics rush to his rescue.

In fact, Vettel wasn't leaving the pits he was on track when the issue occurred. However, in a masterpiece of quick thinking he pulled across the track and stopped just before the end of the pitlane.

Ricciardo is told to pit for a "nose change". Mechanic can be so cruel.

A 25.027 sees Bottas go quickest, ahead of Perez, Raikkonen, Grosjean and Ocon.

Meanwhile, asked about his issue, Alonso replies: "It's a question for Honda, not for me. The engine blew up after one corner.

"It's the way it is," he adds, "we miss the first session. I feel sorry for the fans. It is tough, but I think it is more tough for McLaren. They bring updates, trying to find milliseconds here or there, and we cannot even run."

Back on track Hamilton improves to 23.637, almost a second quicker than his teammate. However, the Finn hits back with a 23.614.

Magnussen is told he needs to improve sectors "one to three". So now problems there for the Dane who is currently seventh (25.688).

Ricciardo was highly critical of the (hard) tyre choices here, and as drivers continue to struggle you can see he has a point.

The Australian goes fourth, while teammate Verstappen, Kvyat and Alonso are the only drivers still to post a time.

Sirotkin complains of a major drop-off in the slower corners.

As Hamilton goes quickest in S1, the Briton having just retaken the top spot with a 23.531, a clearly frustrated Vettel watches his progress on his monitor, the German out of his car while his crew work on it following the earlier issue.

At the forty minute mark, when the extra set of tyres need to be handed back, only Massa and Stroll are on track. Indeed, the Canadian is on the medium rubber, the first driver to make the switch.