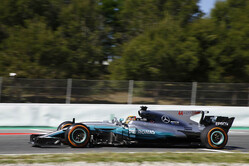 Ahead of today's second practice session, the air temperature is 25 degrees C, while the track temperature is 43 degrees. It remains bright and sunny.

After all the excitement in terms of updates, B-spec cars and so on, the order at the end of today's opening session was somewhat familiar; Mercedes, Ferrari and then Red Bull. Indeed, the only significant change was to see the Haas duo seventh and eighth.

Sadly, it was all too familiar at the other end of the timesheets, Fernando Alonso suffering an engine failure on his out lap.

Rather than listen to the usual bull from Honda the Spaniard took the advice of his legendary meme and headed out of the circuit, the place he would rather be turning out to be a local tennis court.

While it is still early days, the 0.9s gap between the Mercedes and Ferraris is worrying, though we had warned that the German team had upped the ante in terms of its massive update package.

Alonso wasn't the only driver to suffer a technical issue, with Sebastian Vettel, Daniel Ricciardo and Sergey Sirotkin among the drivers who spent more time in their garages than they wanted, but at least none of them felt things were that bad they needed to change sport.

The lights go green and Magnussen, who stopped on track in the final moments of FP1, is first out. He is followed by Palmer who gave his car over to Sirotkin earlier.

Posting a 31.495, Magnussen complains there is "something wrong with the car". When asked for a bit more detail he utters a litany of issues. Among them: "The rear is nowhere. It suddenly lets go. Look into the last corner..."

Vettel takes the top spot with a 24.655, the German, like his rivals, on the medium rubber.

Though the drivers clearly struggle for grip, the times are tumbling, Raikkonen posting 23.143 to go quickest ahead of Vettel, Verstappen and Sainz.

Ass Alonso looks set to head out, Hamilton and Bottas are on track.

"I have a hot water warning," advises Raikkonen.

Hamilton reveals that it is "gusty". As Bottas is appraised of his teammate's warning, Vandoorne follows the Briton's example and runs wide in T13.

"I can't get this tyre to work, I don't know why," says Stroll. "It's too easy to make mistakes, I just have no grip!"

Nor has Verstappen, who runs out of road in T9 and has a big, big moment but does well to hold it together.

"Just suddenly lost it mid-corner," he explains. He is told it was a "wind gust".

As Alonso finally heads out, Hamilton has another moment in T13.

If you've ever scraped the gungy green stuff from the blades of a lawnmower, you'll know how the Red Bull mechanic feels as he clears grass from the front of Verstappen's car.

As Alonso heads back to the pits, having completed an installation lap, Vettel is the first driver to switch to the softs. The German improves from 24.003 to 21.220, going quickest by 0.842s.

Now on the softs, Raikkonen posts 21.112 as more and more drivers follow suit and switch to the yellow-banded rubber.

No sooner has Bottas posted 20.892 than teammate Hamilton stops the clock at 20.802, the Mercedes duo 0.3s clear of the Ferraris.

A big moment for Stroll in T8, the Canadian having carried too much speed in T7. He runs wide and kicks up a big cloud of dust.

Coming up to 'half-time', it's: Hamilton, Bottas, Raikkonen, Vettel, Hulkenberg, Palmer, Massa, Sainz, Grosjean and Ocon. Alonso has yet to post a time.

The Force India duo off the pace today, Ocon currently 12 and Perez 14th, both over 1.7s off the pace.

Alonso is back on track and looks as though he's finally about to post a time. On the medium rubber, the Spaniard posts 26.700 to go twentieth.

"We need to slow down and box, I'm afraid," Raikkonen is told. The Finn subsequently advised that he has an "engine problem". However, while the Finn does intend enter the pitlane, he continues to the end and performs a practice start.

With 32 minutes remaining, Kvyat switches to softs, leaving Alonso as the only driver yet to try them. Elsewhere, most other drivers are on their race sims.

Raikkonen reports debris on the track as replay shows it is a piece of the left bargeboard and came from Sainz' car after the Spaniard ran very wide in T9.

"Am I allowed to push or not," asks Raikkonen. "Stay as you are," he is told.

"The car is back to being undriveable," declares Magnussen, the Dane having sole access to the team's updates today.

Several minutes the session is red flagged in order that the debris can be removed. Prompting the question; why wasn't the VSC deployed... and sooner.