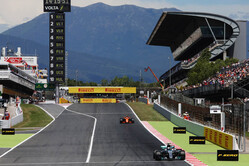 Mercedes topped the time sheets ahead of Ferrari and Red Bull during the two free practice sessions today, both on the medium and the soft tyres. The hard and the medium tyres only were used during FP1, with the teams then moving onto the soft tyres in the more representative conditions of FP2. Although yesterday was affected by rain, washing the surface clean of rubber that had been laid down before, conditions were dry and warm today, with FP2 finishing in 27 degrees ambient and 42 degrees on track.

Much more than 1.5 seconds has been seen so far between the medium and soft tyres, but track conditions were slower in the afternoon than the morning, mainly due to variable gusts of wind: a well-known phenomenon in Barcelona. This meant that the actual performance gap was difficult to assess. As usual, the surface was 'green' and slippery in the morning, but is still evolving with more rubber being laid down.

Mario Isola: The quite strong and variable gusts of wind have made it tricky for the teams to set consistent times during FP2; added to the interruption with the red flag towards the end that stopped the long runs, it hasn't been easy to put together some reliable data so far. However, we've seen a gap of about 1.8 seconds between the hard and medium in FP1, and there is expected to be an eventual performance gap of more than 1.5 seconds between medium and soft. These two will be the race tyres, and as expected we've seen some degradation on both. Understanding this more precisely will be the key to the race strategy.