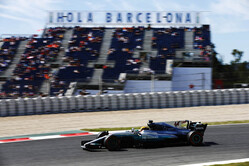 Mercedes driver Lewis Hamilton went fastest in hot conditions during qualifying at the Spanish Grand Prix, setting a time that was nearly three seconds faster than his pole position from 2016.

Mercedes, Ferrari and Red Bull were the only teams to get through Q1 using only one set of the soft tyres.

From then on, only the soft tyre was used - so this is the tyre that the top 10 will start the race on, with two pit stops expected for most drivers. Fernando Alonso qualified seventh for his home grand prix after completing just one run on the soft in Q3, along with Williams driver Felipe Massa and the two Force Indias.

Mario Isola: "We had an extremely close qualifying session, with very small margins between the contenders. I think we can expect two pit stops tomorrow, as the performance gap between the medium and soft means that the drivers will all want to maximise their running on the softer compound. As a result, we'd expect at least two stints on the soft for as long as possible, with just one stint on the slower medium."