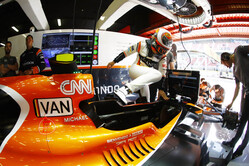 It was a difficult start for Fernando at his home race in FP1, when he suffered an engine problem causing him to stop out on track at Turn Two on his first lap out of the garage. The team elected to change the power unit, and the mechanics worked extremely hard to get Fernando back out on track shortly after the start of FP2. Fernando completed 21 laps but struggled a little to find a rhythm, and could only manage the 20th fastest time.

On the other side of the garage, Stoffel had a much more productive day. The first practice session was spent evaluating new aero components, and although planned set-up changes split his running in two, he finished the morning with 24 laps under his belt, and set the 13th fastest time. In FP2, the focus switched to longer, higher fuel runs. Despite an interruption due to a red flag to clear debris out on track, Stoffel completed 36 laps without any issues, and once again finished the session in P13.

Fernando Alonso: "Obviously, it's not an ideal start to the weekend as we completely missed the first practice session because of an engine problem. At least I managed to get some training done - when I heard I had two hours before the next commitment I decided to do just that. I've had very little time in the last few weeks to train, and my dedication is still 100 per cent on my fitness and my preparation.

"The poor show in the afternoon session was due to the fact that first of all, you need to calibrate the engine when you put in a new power unit, so in the first couple of runs the power was a little bit inconsistent. We ran out of time, so we put on a new set of tyres even though not everything was calibrated. Towards the end of the session, when we put in more fuel and we were running in similar conditions to everyone else, we were doing more or less the lap time we were expecting, close to our main competitors for the race.

"I feel confident that tomorrow, when we'll put everything together, we'll be in a more or less competitive position and hopefully we can be close to the others."

Stoffel Vandoorne: "I've definitely had one of my best Fridays so far. It's the first time that I've had a Friday this season without any big problems - we ran through our programme without any big issues, so that was good.

"Everything ran smoothly on my side, however, we saw that on Fernando's side it was a bit more complex. Unfortunately, he missed FP1 and didn't do so many laps in FP2, so it still shows that reliability is one of the key issues we have to work on for the next few races.

"We've brought quite a few upgrades to this race, but at the moment it's different to judge any of them individually. At the moment, everything is working pretty much as expected, and tonight there's a lot to analyse to see exactly how the day ran. Hopefully tomorrow we can fine-tune everything a bit, and extract a little bit more."

Eric Boullier: "Today wasn't a great day, obviously, especially for the local hero, Fernando, whose running was truncated by an oil leak whose causation we're still in the process of trying to determine.

"However, Stoffel had a trouble-free day, and consequently put in a decent number of laps in both FP1 and FP2, ending up 13th-quickest in both sessions.

"Friday lap-times are rarely a reliable barometer of actual relative performance, of course; but, even so, we're pleased that we now have data sufficient to do the necessary number-crunching prior to FP3 tomorrow morning and quali tomorrow afternoon."

Yusuke Hasegawa: "Today was unfortunately a tough day for Fernando at his home grand prix. Shortly after exiting the garage in FP1 a mechanical issue caused an oil leak forcing him to stop out on track. We opted to change the PU before the start of FP2, and we are still investigating the root cause of the problem. The team worked incredibly hard to get him back out on track and maximise data collection for tomorrow's FP3 and qualifying.

"On the other side of the garage, Stoffel completed 60 laps, and we were able to run through his programme without any problems, which included confirming the effectiveness of the small update installed this weekend, and I think it worked well to improve his performance.

"Despite having a disappointing day today, we still think we have chance to recover the situation in the coming qualifying and race. Our team will have to make another hard effort tonight to send our drivers back on track for tomorrow's sessions with the best settings, and we hope to have a better day."