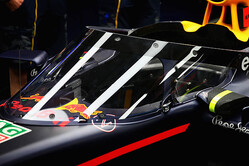 Following last month's meeting of the Strategy Group, it was revealed that after a couple of years of debate over the Halo device, it had been decided that the FIA would now throw its weight behind the Shield, an alternative form of driver cockpit protection which is understood to be remarkably similar to Red Bull's Aeroscreen (pictured) which had been dismissed as insufficient testing had been carried out.

Instead the sport is opting for The Shield though the FIA admit that track tests need to be carried out over the course of the season in preparation for its implementation next year.

Despite the 2017 title fight seemingly only just underway, most of the teams are already beginning work on their 2018 contenders. Asked if the wait on progress with The Shield is compromising their efforts and whether there was a deadline, it appears there is growing frustration at the seeming lack of progress.

"We've seen some preliminary models," said Force India's Andy Green. "We've been looking at how we integrate those into the chassis next year.

"There are a lot, a lot of question marks over it," he admitted. "There's a lot of work to do in the timeframe that we have been given. So we need to make some smart decisions going forward.

Ahead of a planned meeting with the FIA, he added: "Hopefully we'll be discussing that, with a view to how we answer all those questions in the time period we've got.<p>

"I think it depends which colour shirt you have on," said Red Bull's Paul Monaghan of the deadline.

"The research into its functionality and protection, it's got to happen almost in parallel with the installation," he continued, "which makes it quite a tricky job, because whatever they change in terms of screen then has an implication to a chassis and if you have cut your patterns then you are in a fairly awkward situations.

"If it all happens in parallel then the cut-offs are going to be somewhat team dependent.

"As Andy said, there is a hell of a lot to get through to ensure that this is a thoroughly developed and sorted package to put on next year's car."

"With regard to the deadline, usually we would be the end of July, beginning of August, define the monocoque," confirmed Jorg Zander of Sauber.

"Of course the fundamental question here is about the integration of the shield and the attachment, so there is a question about structural integrity, we need those detailed informations of course.

"At the moment, as far as I know, we want to test this system at some point in September, which I think is good. I think the enhancement of safety, improving safety is a fundamental job of ours and I think we should support that, we do support this. But of course we have to make sure that these things are worked out sensibly and that they fit within the time schedule. But we are working together with the FIA in order to achieve this."