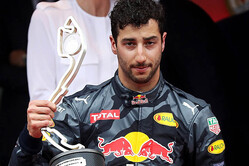 Who will ever forget the sight of poor Daniel Ricciardo on the Monaco podium last year, despite having finished second the normally effervescent Australian clutched his trophy looking like a little boy who'd just been told there is no such thing as Father Christmas.

That time around, as the Australian, who had started from pole, appeared to be heading for certain victory, he pitted only to find that his team was unprepared and as the mad scramble to get his tyres began so his race hopes rapidly evaporated - this coming two weeks after another strategic error cost him dearly in Spain.

Sadly, despite Christian Horner's assurances, yesterday, a strategic error by the team cost Ricciardo any hope of taking pole for the second successive year, the team sending him out for his final qualifying run in traffic, indeed, behind his own teammate who was closing on Jenson Button. Had the team delayed sending him out - there was a 20s gap behind - he might well have qualified higher than 5th.

"We needed a clear out lap to push and warm the tyres up," said the disappointed Australian. "The first attempt, the lap was pretty scrappy and the tyres weren't quite there... so we made a few adjustments and I thought 'I'll give it a go'.

"But we came out in traffic so I couldn't push on the last run, on the out lap, and it seemed like we had twenty seconds to Perez behind me and they put me out just behind Max and he was on a build lap, so he wasn't even going that quick.

"Then we caught Jenson as well but there was 20 seconds behind me, so why we put me out in traffic when we knew we needed a hard out lap? It was a pretty obvious mistake.

"It seems like sometimes the intensity here makes you lose a bit of concentration and make some pretty obvious errors," he suggested. "It's not intentional, but today is just frustrating, and this track is an opportunity for us to do better.

"I think we could have challenged everyone but it means nothing saying it now because we're not there, but we were very far from the potential, that's the frustrating part."