Max Verstappen prepared for the Monaco Grand Prix by attending the Jumbo Racedagen at Zandvoort in front of a fervent home crowd, and blitzing the track record in the process.

The circuit, which has not hosted an F1 Grand Prix since 1985, when Niki Lauda proved victorious, unofficially had its previous best time, posted by Ferrari test driver Luca Badoer, broken by Verstappen by more than three tenths of a second.

Driving the 2012 Red Bull for the demonstration event, Verstappen blazed a trail on track before performing donuts, his engineers genuinely concerned they might run out of tyres on the hard-wearing surface.

Verstappen also took time out to sign autographs for fans, who turned up in their droves, as well as doing a parade lap in a tour bus, and performing alongside a magician. 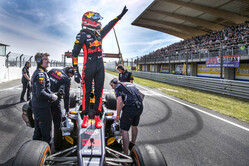 "It is super to be here and driving the RB8," said Verstappen, "The V8-engine makes a nice sound... that always makes it extra special.

"It is a slightly different car that I am normally used to, but with a better sound, so that is also better to use here.

"I know from my Formula 3-period that Zandvoort is a great circuit. There is way more grip now with the new tarmac. It is more comfortable to drive on, because there aren't that many bumps anymore, that's very positive."

"I decided to push it a little bit because, if you are here with so many fans, I think that's a good idea. It was not easy but, in the end, with three tenths that's good enough I think.

Amidst claims that F1 might yet return to the legendary track, when asked about the prospect, Verstappen said: "If it was up to me, we'd have it here already.

"Of course that would be very nice but there is more to it like a budget and the infrastructure. A lot needs to be done in order to be able to organise this."