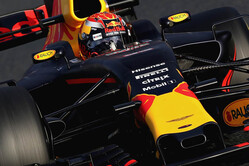 The 2017 rules changes not playing to Red Bull's aerodynamic strengths as anticipated, reliability issues and an underperforming Renault power unit have not helped the Austrian team's cause.

Just four races in and the Austrian outfit is 79 points adrift of the leaders, both its drivers finishing a race on only one occasion thus far this year.

Much has been made of a major upgrade to the RBR13 for this weekend's Spanish Grand Prix - scene of Max Verstappen's maiden win last season - however, a planned upgrade from Renault that was due in Canada has now been delayed.

Like Honda, the Renault power unit has suffered a number of MGU-H related issues, while in Sochi water leaks appeared to be the order of the day, all three teams supplied by the French manufacturer suffering issues. Indeed, much like Honda, as one problem is solved another arises.

According to reports not only has Renault been forced to delay the Montreal upgrade, when it does come the stop forward will not be as significant as originally hoped.