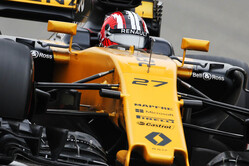 Renault Sport Formula One Team secured its second points-scoring finish of 2017 with a robust eighth place from Nico Hulkenberg in the VTB Russian Grand Prix at the Sochi Autodrom. Nico started eighth then ran a mammoth 40-lap stint on his qualifying Ultrasort tyres before changing to the Supersoft tyres for a final 12-lap bid to wrestle seventh place from Esteban Ocon. Jolyon Palmer's race ended at the second corner, the victim of an ambitious over-the-kerbs overtake attempt from Romain Grosjean.

Nico Hulkenberg: "I'm really happy with the strategy we ran today; there wasn't too much left from the tyres at the end of that first stint, but we achieved what we set out to do. I lost track position at the start so we let everyone else pit ahead of us and went as long as we could go on the first set of boots. I kept pushing and the car performed really well, staying switched on with the track improvement meaning I was able to get faster and faster. I was definitely happier with our race pace today; we've still got more work to do but we've clearly taken a step in the right direction this weekend."

Jolyon Palmer: "I had a decent-enough start then heading down to Turn Two there was a Sauber on my outside then Romain made a very ambitious move over the kerbs on the inside from behind. There was no space for me to go because of the Sauber, so maybe Romain wasn't aware of that, but he kept it in, hit me, then we were both out of the race. That was a shame for both of us really. I feel for my crew this weekend as they've worked so hard on the car, then we had such a short race. Now it's reset, reload and look to Barcelona."

Cyril Abiteboul, Managing Director: "Another step forward for the team this weekend, not only confirming that we are regular top ten qualifiers but also showing that our race pace has improved relative to our qualifying performance too. Today was a really exciting race for Nico as we ran a reactive strategy after a poor first lap, trying to take the fight to the Force India cars as best we could. With a unusual strategy, we kept the pressure on them for most of the race, but eventually Nico had to manage his fuel and could not really threaten Esteban. We did everything we could at a circuit we knew would not be one of the most favourable for our package. Our overall performance gives us strong optimism as we head to tracks which should be more suited to our car, especially as we have a healthy development program lined-up. Jolyon had a very tough race weekend with a very short race after Romain's ambitious move. It is a real shame as he had shown clear signs of competitiveness on Friday and Saturday. We owe a big thanks to everyone in the garage this weekend as there have been some very long hours worked, without a single fault. Finally, congratulations to Valtteri Bottas on his first Grand Prix victory."