Haas to stick with Brembo brakes for Spain 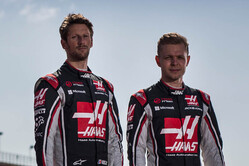 As its issue with brakes continues, for the first day in Sochi Hass opted to try Carbone Industrie's product, its previous test in Brazil (2016) having proved inconclusive. Ahead of this weekend's Spanish Grand Prix, team boss Guenther Steiner reveals why the team will continue with Brembo, for now...

"We started off with CI brakes in Sochi. We weren't getting enough cooling for them, and if you don't cool them enough, you overheat the brake itself and the pedal gets long," he explained. "Also, the wear is very high.

"We looked into it to see if we could survive a race, but we realized we could not. Therefore, the decision was taken to go back onto the Brembo. As it stands now, we will race Brembo in Barcelona.

"To figure out how we can fix the problem will take a bit," he admits, "but we will get there. It isn't an easy problem to solve. We will take our time. We know what we've got after our Bahrain test with CI brakes, and after Sochi in FP1 and FP2. We know what we need to do and what needs to get done, but it will take a little bit of time.

"Romain was pretty happy with the latest iteration of Brembo," he confirmed. "He said he's ok with it. Kevin liked the CI better because the bite is better. He just has a better feeling with the CI brakes. Now we need to get the CI working and see where we stand before coming to the absolute conclusion. I'll be happy when we can check this off of our list.

"Everybody needs to understand that this is a very sophisticated brake system. It is not easy to fix. The obvious question, and rightly people ask, is that it cannot be this difficult to fix a brake. It actually is. It isn't easy. This is because they're highly complicated technologies, they're highly advanced. When you change from one to the other, you encounter issues you're not aware of until you try it properly. Without testing during the season, you need to do it in FP1 and FP2. You always have to wait two weeks to do something. So you can never go and do a proper test and do modifications. You always have to fit it in somehow. It compromises your testing, and that's why it takes so long. It's not that we're not working hard. Our people are very competent and can do this, it just takes time."